Comic Book / Coady And The Creepies 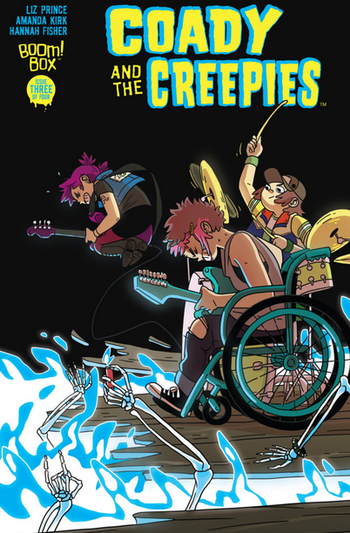 Meet the Creepies: a punk rock band composed of triplet teen sisters Coady, Criss, and Corey. They've more than earned the label of punk — they have the attitudes and the musical skills to back it up. They also have a tragic past — just as their career was starting to take off, they were involved in a terrible van accident that killed their tour manager, scarred Corey, and paralyzed Criss. Mysteriously, Coady was seemingly completely unharmed. Now, a year later, they're back on the road and determined to be the first-ever winners of Pinmageddon: a cross-country touring blitz in which bands race to play all the best punk venues and collect the enamel pins at each. If the Creepies want to win, however, they'll also have to learn how to deal with the media attention that's surrounded them ever since the accident, as well as their thuggish rivals the Boneheads. And Coady has a dark secret that could tear apart the band once and for all...
Advertisement:

The series is written by Liz Prince and illustrated by Amanda Kirk. It was first published in October 2017 by Boom! Studios and ran for four issues. It is currently on hiatus.

Coady And The Creepies contains examples of: