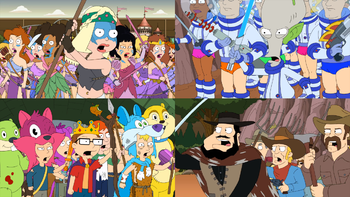 Out of the chaos, four kings rose to power. In the north, the Tween King and his army of whiny turds. To the east, the Feminist Queen and her army of splay-legged princesses. In the south, a strange-headed man leads an army of futuristic astronauts that are also somehow old-timey. And to the west, the Cowboy King, Black Stan and the Italian Stallions.