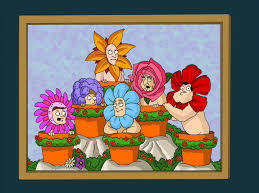 Anne [Geddes] did take that great staff photo. "That she did, that she did."