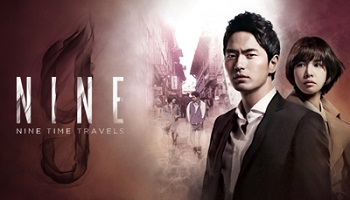 Nine: Nine Time Travels is a 2013 Korean Drama that ran for 20 episodes. Park Sun-woo is an anchor for a Korean news program who has fallen in love with a junior reporter for the news channel, Joo Min-young. However, Sun-woo's past has several tragedies. His father Chun-soo, a hospital director, was killed in a fire nearly 20 years ago. His mother is in a nursing home, with a severe case of dementia. And Sun-woo suspects Choi Jin-chul, his father's old partner, of setting the fire that killed Chun-soo. Jin-chul has since become a very rich businessman and chairman of a stem-cell research firm.

Sun-woo must use the incense sticks to fix what went wrong with his family, and defeat the evil Jin-chul. And he has to hurry, because of one more problem in his complicated life—he has terminal brain cancer, and has something like six months to live. And while all this is happening he and Min-young become lovers, but Sun-woo's time-hopping will complicate that part of his life as well.