Note: Only list characters that have made a significant contribution to the story; that is, if they are only a cameo or have yet to appear in the story at all, leave them out. 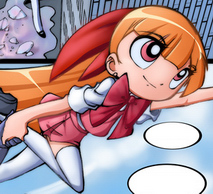 Leader of the Powerpuff Girls, naturally, although a bit more reserved in this version than in the TV series. She has struck up a friendly relationship with Dexter after being saved from Mandark in the first arc of the webcomic.

The perky blonde of the trio. Not much difference between her version here and the 1998 TV version. She is the most extroverted among her sisters, striking up numerous friendships in the series, and has picked up an interest in dancing.

The rough-and-tumble brunette of the trio. Much more aggressive here than on TV, and has an amusing crush on Jack-sensei, the gym teacher. 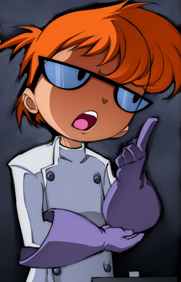 The titular boy genius of Dexter's Laboratory. Still, the same Science Hero that we all know and love, though thankfully not as arrogant this time around. Tests the girls' combat skills on their first day at Megaville Elementary, becoming friends with Blossom afterward. He is haunted by the death of Dee Dee, his older sister, who died trying to protect him while he was fighting Mandark, his arch-rival. He was attempting to reconstruct her as an android but has since suspended the project.

Dexter's sister. She died after Taking the Bullet for Dexter during a firefight with Mandark, returning, later on, to keep history from repeating itself with Blossom. 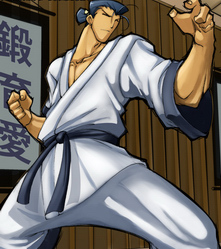 Yes, that Jack. Plays the role of gym teacher at Megaville Elementary and lives at a dojo located near the school. He teaches students basic self-defense while also helping to maintain order on campus, as demonstrated during the Powerpuff Girls' fight against Dexter. Has quite a following amongst the female students.

The little history wiz from Time Squad. Another one of the students at the school, and also a friend of Dexter's. In this version, he is an accomplished Time Ranger with the equipment to travel through time. He shows Blossom Dexter's past in order to help her better understand him. Later, he acts as the messenger when Mandark kidnaps Blossom, and ends up joining in on the rescue mission. 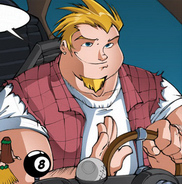 The big loveable buffoon of Megas XLR. Comes to Dexter's aid to help rescue Blossom, holding off Samantha and her mecha while Dexter deals with Mandark. Before that, he loaned Megas to Dexter for repairs and maybe some tweaking.

A group comprised of all of the story's main villains and headed by Dr. X. Unsurprisingly, their ultimate goal is to Take Over the World. 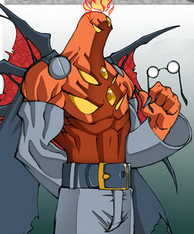 A mysterious, faceless figure with a flaming head who has his sights set on taking over the world, starting with Megaville.

Dr. X's daughter and a Powerpuff Girl-look alike / copycat / clone. One of the strongest fighters in the Darkstar Council. She manages to give Blossom a real run for her money during their Cat Fight. Has deep emotional attachment to Mandark and GIR, whom she calls "Girly". 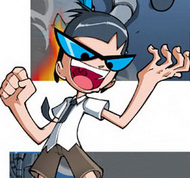 Dexter's bitter rival in all things science. During one of their usual scuffles, one of his Jackbots managed to get clear aim at Dexter. Dee Dee, however, jumped in the line of fire to save him at the cost of her own life. Mandark took her death as hard as Dexter did, possibly even more so, and with a little prodding from Dr. X and Bell, he convinced himself that Dexter was at fault and plotted to kill him for it by kidnapping Blossom and using her as bait to lure him out. Sure enough, Dexter comes to rescue her, and the two duke it out in one final battle, which cumulates in an emotional breakdown so severe that Mandark outright demands that Dexter kill him. Dexter refuses on the grounds that Dee Dee wouldn't want him to do it, and Mandark, having completely lost the will to live at this point, triggers his lair's self-destruct mechanism and presumably dies in the ensuing explosion. 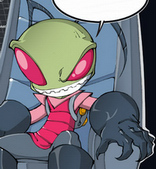 Everyone's favorite Irken invader is seen here fulfilling the role of Dr. X's house maid, while his robot companion GIR is off with Bell. Dr. X has promised him the chance to take a shot at the Powerpuff Girls himself. Whether he was just humoring Zim or truly meant it remains to be seen. 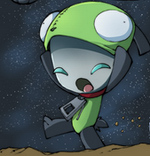 Zim's robotic assistant. Silly and nonsensical as always, Bell has taken a liking to him to the point of unofficially adopting him as her pet, and the two can usually be seen together in any strip in which Bell makes an appearance. 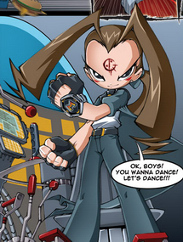 The resident bully from the Medabots series, AKA Kikuhime being her original Japanese name. Why she joined forces with Dr. X is anyone's guess. She assists Mandark during his battle with Dexter by distracting Coop and Megas with her own equally powerful Humongous Mecha, and she has the upper hand until Buttercup shows up, forcing her to retreat but not before vowing revenge on Buttercup. 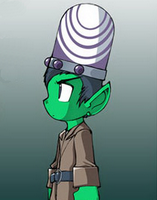 The Powerpuff Girls' arch nemesis; his obsession with destroying the girls caused him to follow them into Megaville after they moved there. After his initial attempt on their lives on the first day of school failed, Mojo was shanghaied by Bell and brought to Dr. X, where he was offered a place in the Darkstar Council. Just what plans Dr. X has for him remains uncertain.

Jenny's arch-enemy and the former ruler of Cluster Prime. She now leads a rogue faction still loyal to her and has teamed up the Darkstar Council

A cowardly pink canine who was left in Jack-sensei's care by his previous owners, Eustace and Muriel Bagg, after getting badly injured note most likely protecting the Bagges from danger. Became fast friends with Bubbles. 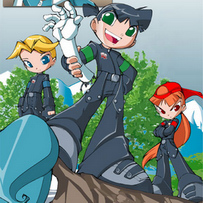 Brick, Boomer and Butch, the Powerpuff Girls' evil male counterparts who were originally created by Mojo Jojo. Here, they're the subject of study in a secret government project called "Project Rowdy". Exactly what said project entails remains a mystery. In this version, Boomer is a little more innocent, while Brick and Butch are apparently planning revenge against the Powerpuff Girls for their last defeat. Interestingly, the idea to include the Rowdyruff Boys in the comic at all wasn't Bleedman's, but that of a deviantART member.note The fan in question is credited by Bleedman in his comments below this page

of the comic. By the time of comic, the Rowdyruffs hadn't reappeared back in the TV show yet.

The robot heroine of My Life as a Teenage Robot and also part of Project Rowdy, where she more or less serves as the boys' combat training opponent. Their last simulation session ended badly. She lost an arm and was seen having it repaired. Has recently reappeared back in the story. 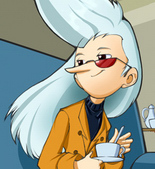 Jenny's "mother" and another participant in Project Rowdy. She disapproves of the Rowdyruff Boys' extreme fighting style, particularly that of Butch. And isn't afraid to talk down to them in spite of their power. It was later revealed she in town from Tremorton for a science expo, which the ballet class from Megaville Elementary is opening for.

The Grim Reaper, though he hasn't been doing much reaping lately. His existence in this universe is expanded upon in the semi-related Grim Tales from Down Below. If the two comics do in fact share a universe, that is.

Mandark's sister and previously unseen member of Megaville Elementary student body. Appeared immediately following Mandark's death and seems to be keeping an eye out specifically for Dexter and the Powerpuff Girls. Has apparently been head of the school's dance troupe since something happned to the previous leader ( presumably Dee-Dee dying) and previously hung out with Mandy and Gaz. 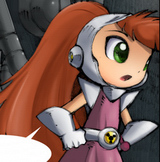 Better known as Atomic Betty. Stars in a sidestory entitled The Forgotten, in which she and her crew come across a seemingly abandoned ship that turns out to be occupied by the Cluster. The outcome wasn't pretty. 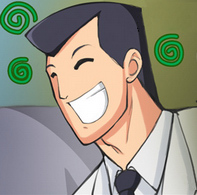 The Powerpuff Girls "father". Ended up moving his family to Megaville after a job opportunity and trying to help them adjust. A very loving father with a bit of a silly side occasionally.

Dexter's lab monkey who was given superpowers from his experiments, unknown to the boy genius as Monkey keeps it hidden from him. Was called into action by Honeydew (one of the MC's of the science expo) after the Darkstar Council invade it.

Full title: The Prime Woodland Naga Vicar of Resolution, Divinely Chosen Proselyte of the Great Azure Dragon and Heaven of the East. A mysterious boy who Bell encounters while on the moon. He reappears watching the fight between Blossom, Buttercup, Bell and Sam alongside Grim and Dee Dee, waiting for something to happen and asking Grim to do something the three want.

An android created by the brilliant Dr. Ivo that was designed to copy the powers of anyone it sees. It has copied so many powers that it is practically a Physical God. Despite this it has decide to take uninvolved role in the affairs of the universe. It shows up to save Betty and read her mind to discover what happened to her, but decided to stay out of the growing conflict as it is not his place to intervene.