open/close all folders
The Sanzo-ikkou

Our hotties and "heroes", the main characters of the series. 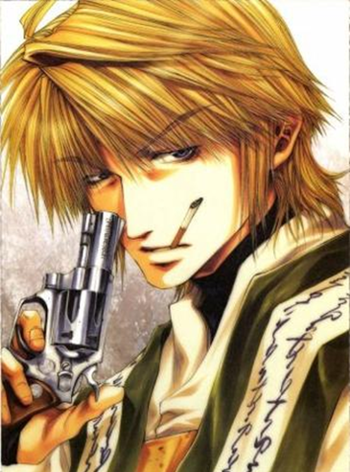 A short tempered Buddhist monk who smokes and carries a revolver. He was abandoned as an infant and found by the Sanzo priest Koumyou, who raised him and named him Kouryuu. He was granted the supreme rank of Sanzo, guardian of one of the Sutras from the Dawn of Time, at 14, becoming the youngest to ever attain the title. Shortly afterword, Koumyou was brutally murdered in front of Sanzo and his sutra stolen, setting Sanzo on a quest to recover the sutra and avenge his master that has lasted his entire adult life. His behavior is classic Jerkass but he's the legitimate emissary of the gods and on the side of Good.

and his previous incarnation 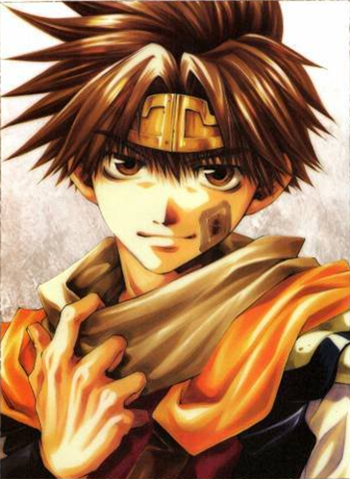 A being born from the Earth, and imprisoned 500 years prior to the series by the gods. He knew the past incarnations of the rest of the Sanzo party, but his imprisonment erased his memory. He was eventually let out by Genjo Sanzo, and since then followed him everywhere, though Sanzo never admits to caring for Goku. Is the most childish of the group and has a child-like enthusiasm for fighting. Of all the characters, Goku has probably changed the most over the course of the series.

Has a Super-Powered Evil Side that comes out if his diadem is ever removed, in which he attacks everything in sight and his enjoyment of fighting turns into a sadistic joy of inflicting pain on others. 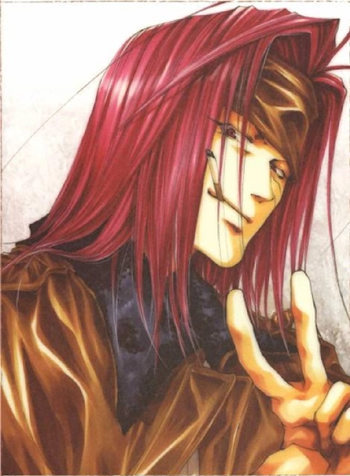 A half-youkai that grew up with an abusive mother that eventually tried to kill him, but his older brother Jien killed her right in front of him to save him. A cardsharp and womanizer who frequently gets into fights with Goku. 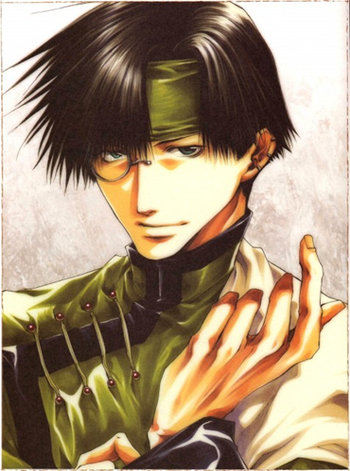 Originally named Cho Gonou, he lived with his sister, who he shared a romantic relationship with. One day she was kidnapped by youkai, and Gonou proceeded to singlehandedly kill them all in the course of fighting his way to the youkai lord's castle, only to find - when he reached his sister's prison cell - that she had been raped, and not wanting to give birth to a youkai child, killed herself right in front of him. In the process, he got the blood of a thousand youkai on him and became a youkai himself. Later he meet with Gojyo and the two were found by Sanzo and Goku who were tasked to bring Hakkai for trial for his massacre of youkai. It turned out for Hakkai that as Buddhism forbids killing (not that it ever stops Sanzo), he is instead given a new identity as Cho Hakkai. He is generally the most polite and intelligent of the group, but even they find him terrifying when he's angry. Occasionally he removes his power limiters and fights as his youkai self, but does so rarely as it can potentially expose him to the influence of the Minus Wave.

A band of four youkai that were unaffected by the Minus Wave, but for reasons that come from following Kougaiji they serve as rivals to the Sanzo party.

A Noble Demon; son of the Youkai King, Gyumaoh, and often addressed as Prince. He has no interest in resurrecting his father and has nothing against humans or the Sanzo party, but as Gyokumen Koushu has promised to revive his mother if he helps complete her plans, he none the less aids her.

Kougaji's younger half sister. Can be best described as a female Goku; all energy and appetite; replace his relationship with Sanzo with hers with Kougaiji, minus that he treats her much better. A bit of an airhead. Has surprisingly large breasts despite her young appearance. Hero-worships her big bro to the extent that she characterizes herself as the prince's sister rather than the king's daughter, and is justifiably wary of her creepy mom.

A chemist, apothecary and healer who was rescued by Kougaiji from being the next meal of the Centipede Demon, Hyakugan Maoh. As a result she is completely devoted to him and willing to die in his service. He has several times had to convince her that she's worth much more to him alive and using her medicinal skills. Variously shipped with him and with her colleague Cho Hakkai, though there's no evidence that she has romantic feelings for either. When the group is at home she often serves as Lirin's nanny/minder.

The youkai that aims to resurrect Gyumaoh, Gyumaoh's concubine and Lirin's mother. As a Foil to the Kougaiji Party, she appears completely evil, caring for nothing and nobody apart from achieving her goals, even her own family mean nothing to her.

An extremely eccentric yet very threatening human mad scientist attempting to revive Gyumaoh for unknown reasons. As of the end of Reload is also known to be Ukoku Sanzo, the heretical keeper of the Muten sutra and an old friend of Koumyou Sanzo...and possibly also his murderer.

Gyokumen's other assistant along with Nii Jianyi. Strict and uptight, she's also Gyokumen's lesbian concubine and a youkai who keeps her youkai ears hidden under her hair.