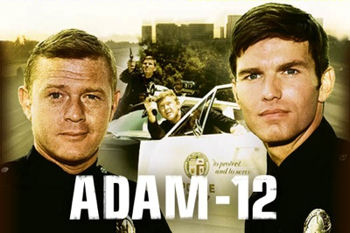 Police Procedural, featuring Martin Milner as Officer Peter J. Malloy and Kent McCord as Officer James A. Reed, two Los Angeles cops partnered in a patrol car with the call sign "Adam-12". Produced by Jack Webb of Dragnet fame as a companion to that show: While Dragnet followed a pair of detectives in the course of investigating crimes, Adam-12 followed a pair of rank-and-file patrolmen as they performed their duties. Scrupulously accurate about police procedures of the period, to the point that several episodes were used in police academies as instructional films. The sense of realism was aided by casting actual LAPD dispatcher Shaaron Claridge as the unseen voice whose frequent calls of "One Adam Twelve! One Adam Twelve!" were virtually emblematic of the show.
Advertisement:

The series ran 174 episodes on NBC between 1968 and 1975, accompanied by a comic book adaptation from Gold Key. There was a failed In Name Only Revival in 1990-91 that accompanied a similar In Name Only version of Dragnet. (This is not to be confused with the 1989 TV movie Nashville Beat, a Spiritual Successor starring Milner and McCord as former partners now working in Tennessee).

The entire series has been released on DVD, and the first four seasons can currently be enjoyed on Hulu

, assuming one is in the United States. As of May 2013, the show (along with the 60s/70s Dragnet) airs weekday afternoons and late night on digital subchannel network MeTV.