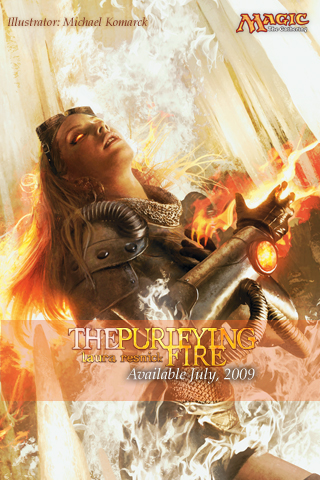 The Purifying Fire, by Laura Resnick, is a Magic: The Gathering novel and the second in the Planeswalker novel series (although it's a standalone with no direct connection to the others), focusing on the red-aligned planeswalker Chandra Nalaar

Chandra lives in Keral Keep on the plane of Regatha, where she studies the art of pyromancy with the other monks. However, the white-aligned Order of Heliud has begun to encroach on the peaceful monastery and the forest surrounding it, and its pursuit of ultimate Order clashes with the monks' ideals of freedom and personal liberty. Walbert, the leader of the Order of Heliud, wants to capture Chandra for his own unknown ends. And when Chandra visits the plane of Kephalai to steal a valuable scroll containing a rare fire spell, she doesn't expect to meet the mysterious Gideon

pursuing her—and she certainly doesn't expect to have to fight alongside him for survival.

The first chapter of the book recounts the events of the Fuel For The Fire webcomic, and the rest of the book continues from there.

The Purifying Fire provides examples of the following tropes: