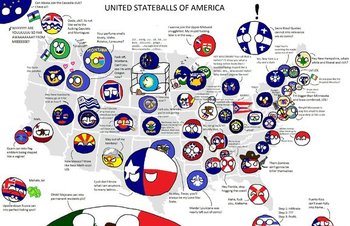 A U.S. centric Polandball spinoff that focuses on the U.S. states, first started in 2013. Unlike the former, it came about on Reddit itself, rather than being moved there by makers of the comics.

Much like the webcomic from which it came, Stateball is focused on portraying states in America as round balls with the design of the state's flag on them. Stereotypes and politics come up in the comics frequently, as well as current events as they happen. Though not as big as Polandball, it has created a sizeable fanbase.

Though every state has shown up in at least a few comics, makers seem to use California, Texas, and Alaska the most, much to the annoyance of less-used states, who want to see more representation.

Currently has a community on Reddit, which can be found here