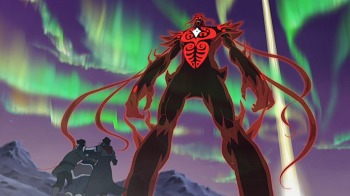 With Vaatu freed, Korra enters the Avatar State to do battle with the spirit, but not before she is able to toss Unalaq back into the material world. Mako and Bolin return to the South Pole to hold him off, while Tenzin, Bumi, and Kya go off to search for Jinora.

Bolin and Mako are able to hold off Unalaq successfully until he unleashes his children on him—much to Bolin's horror. Desna and Eska freeze the brothers as their father returns to the Spirit World. Like Wan before her, Korra has managed to overpower Vaatu and is about to imprison him again—but Unalaq arrives and stops her from doing so. Vaatu then merges with Unalaq, forming the Dark Avatar Spirit with Unalaq as the first Dark Avatar.

As the Avatars clash, Tenzin is having no luck in finding Jinora. To his surprise, Iroh appears to him, and offers to guide him and his siblings back to the material world. Tenzin refuses and reports Jinora's predicament, and Iroh gives him a cryptic clue to her whereabouts. Tenzin, Kya, and Bumi allow a hostile spirit to toss them into the Fog of Lost Souls, a place where human souls are forced to wander aimlessly for all eternity (one such victim is Admiral Zhao, who's been there for over seventy years since his last appearance in "The Siege of the North").

Bumi and Kya succumb to the Fog's maddening effects, and Tenzin begins to as well until the spirit of Aang appears to him. Aang tells Tenzin that he is not Aang: he is Tenzin, and not a reflection of his father. Reinvigorated, Tenzin uses his Airbending to rescue Jinora, Kya and Bumi from the Fog. Meanwhile, Bolin is able to convince Eska to free him and Mako after he professes his love to her.

The battle between the Avatars spills over into the material world, and a boost from Raava gives Korra the strength to overpower the Dark Avatar. However, as they grapple, Vaatu exits Unalaq's body and forcibly rips Raava from Korra's. Unalaq then proceeds to destroy Raava, and with her, the spirits of all previous Avatars from Aang to Wan himself. Korra is no longer the Avatar.

Now the sole Avatar in existence, Unalaq grows into a monstrous Kaiju form, and departs the South Pole to begin his destruction of the world.

Was released a week early at midnight, the same day as the previous two episodes were aired. Can be watched on Nick's website here