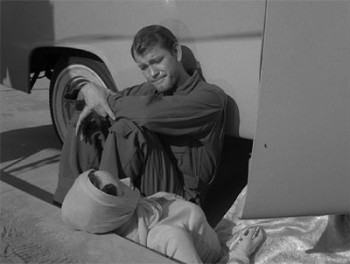 Our main character evaluates his situation.
Rod Serling: The place is here, the time is now, and the journey into the shadows that we are about to watch, could be our journey.
Advertisement:

A man walks down a lonely road wearing a blue jumpsuit. He hears music coming out of a cafe up the road. He enters to find a jukebox playing but no one up front. He begins shouting to the back, expecting someone to be back there, but gets no answer. Frustrated, he goes in the back and finds it abandoned. He searches out back and finds nothing but trash. He goes back into the kitchen to find coffee still hot on the stove, along with some pies and sausage. He pours himself a cup and searches his pocket, finding some money. He shouts that he can pay for his meal, then notes the currency is American. He concludes he is American as well, and admits he doesn't know who he is. He continues to shout for someone, and eventually begins singing to himself to end the silence. Concluding no one is there, he pays for his meal and leaves, heading towards a town.

In the town the streets are empty, no people. He searches the buildings, again, empty. He eventually spots a car with a woman in it and yells for her. He explains that he doesn't know who he is, or even remembers waking up this morning, just that he suddenly found himself walking on the road. He asks the woman if she knows a doctor, but when he opens the car the woman turns out to be a mannequin. He laughs at this slightly until he hears a phone ring in a phone booth. He rushes to answer it, desperately yelling for an answer, but none comes. He calls the operator, but it is merely a recording. He still begs to it, demanding to know where he is. Frustrated, he hangs up. He checks the phone book but finds no clues. He tries exiting the booth, only to find it locked. He angrily beats at the door, demanding someone let him out, but no help comes. Eventually, he gets it open.

He searches the police station, once again finding no one. He starts to feel like he's being watched. He finds a still lit cigar burning in the ashtray, which only heightens his suspicions. He checks the prison cells and finds water still dripping in the sink, along with ready-to-go shaving supplies. He tells himself to wake up, and when the cell door begins to close, goes running through the neighborhood, screaming "Where is everybody?"

He continues to wander the town, still failing to find anyone. He eventually goes into a drugstore, where he decides to serve himself a sundae. He talks to himself in the mirror, believing himself to be dreaming. He even quotes A Christmas Carol, specifically Scrooge's denials to Jacob Marley. He searches the store and notes the detail, finding a shelf of books for sale, each titled "The Last Man On Earth". He once again rushes into the street, begging for someone to answer him.

Night falls, and the man, having amused himself by playing Tic-Tac-Toe in the dirt, is surprised when the city's lights come on. He notices a movie theatre playing a war movie, Battle Hymn. Investigating, he sees the movie's poster, and is suddenly struck with remembrance: he's in the Air Force. Happily, he runs inside, shouting this revelation, but finds no one. Sighing, he sits down, concluding that a bomb must have dropped, but quickly finds the flaws in his logic.

Suddenly the movie starts. He quickly goes up to the projection booth, shouting for someone, but finds it empty. He runs through the theatre, and ends up running into a mirror, knocking himself down. Now half-mad, he runs through the town, desperately looking for someone. Seeing an eye in a sign for an optometrist, he panics further, believing himself to be watched. He eventually collapses in front of a walk button, pressing it repeatedly and begging for help.

The scene then cuts to a group of men in uniform, hearing the man's pleas. They are watching him inside a small box, and he is really pressing a panic button. After a few moments, they clock him, and the leader orders his release. The colonel releases him with care. He then reports to his superior that he was in that box for 484 hours and six minutes. The press then arrives for a statement. The man was locked in a simulated flight to the moon, testing to see how a man would react to the isolation of the trip, which would take about three weeks. The town was a product of his sensory deprived mind. He then talks to the man, Mike Ferris, now lucid once more. As he is carried out on the stretcher, he looks at the moon and promises to be there soon.

Rod Serling: Up there, up there in the vastness of space, in the void that is the sky, up there is an enemy known as isolation. It sits there in the stars waiting. Waiting with the patience of eons. Forever waiting...in the Twilight Zone.

Alternative Title(s): The Twilight Zone S 1 E 1 Where Is Everybody