A guide to the residents of the Sleeping World in The Dreamstone.

open/close all folders
The Land of Dreams

Tropes shared throughout the Land of Dreams:

The wise head council of Dreammakers, responsible for sending dreams within the sleeping world.

The Dreammaker's loyal dogfish. Brought to life from a dream, Albert swims in the air and has the general mannerisms of a normal dog. 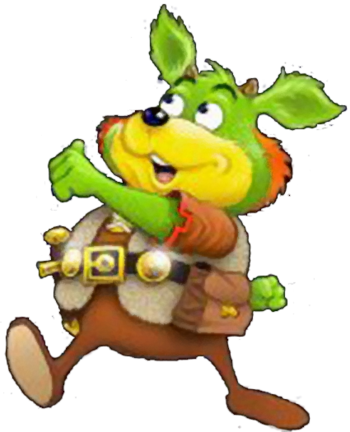 The young assistant of the Dreammaker. Clumsy and not too bright but often relied on to protect the stone when the Urpneys attack.

The leader of the Wuts, who guard the Land Of Dreams. Usually mellow but intelligent and powerful in magic.

Pildit's somewhat hyperactive grandmother. Also one of the most competant of the Wuts.

Shy creatures that help maintain the Wut forest from underground.

The ruthless ruler of Viltheed who will stop at nothing to steal the Dreamstone and disperse nightmares to the Sleeping World. He has a very volatile temper, which is often lashed out on his minions, often making him more a threat to his allies than the heroes.

Psychotic Mad Scientist and loyal right hand minion to Zordrak (at least when the time fits). Creates the many inventions the Urpneys use to attack the Land Of Dreams and steal the Dreamstone.

Gung-ho but dillusional military leader of the Urpneys (promoted after the previous leader was fed to the Frazznats).

Neurotic member of Blob's "elite squad". Constantly moaning or suffering breakdowns from the abuse of missions.

Other member of Blob's squad. Somewhat more upbeat than Frizz, but even more brainless.

The original leader of the Urpneys.

A sentient planet that acts as the leader of the Council of Dream Makers.

Zordrak's narcissistic sister. Both hate each other and compete for the Dreamstone.

A relative of Urpgor's. Even more deranged and sadistic as himself. Resides on the planet Tempus Fugit.

A robotic bird created by Urpgor. Its singing is designed to entrance people, in hopes it would lure the heroes into handing the stone to it. However its effects on the Urpneys, and its disobedient personality, lead the plan to fall apart.

A mechanical beaver created by Urpgor. Armed with an enormous buzz saw in its mouth, it was built to tear down the Wut Forest and dam its river, starving the bottle trees of water. Despite its competent effort, it and Blob were forced to retreat when they ran out of riverside trees, with both their plots to drain the forest and take the Dreamstone foiled.

A massive stone monster created by Zordrak as a weapon, but which he learned was beyond his ability to control. As a result, he buried it somewhere around Viltheed, until it was accidentally set it loose again.

A large goofy bird. Both sides sought after its presence (the Noops for a feather, said to be able to bring happiness from tickling, and the Urpneys for its nest, made out of a powerful mineral).

A space traveller who uses the remains of used dreams to create his own. Shy and downtrodden, Hod got caught in one of the Urpneys' schemes, until Rufus and Amberley saved him.