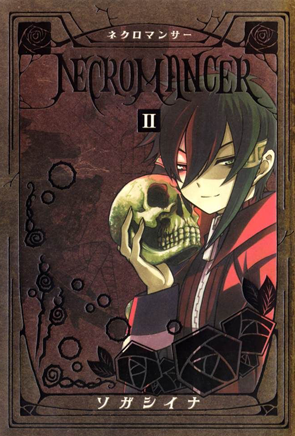 Death Is Cheap. Well, not really.

Necromancer is a dark manga by Shina Soga, which ran between March 2009 and January 2011 in Shounen Sirius and has been collected in 4 volumes.

In Slum Street, there lives a necromancer, Asutsuo Johann-Faust. If someone wishes to have another brought back to life, provided that they can bring all the bones intact to him, he can resurrect them by taking three years of the client's life and giving it to the deceased. However, the process also amplifies certain characteristics within the resurrected individual. The story mostly deals with the clients who come to the necromancer, the circumstances of the resurrections, and the consequences. However later on, events from Asutsuo's past start to catch up to him.

Aside from Asutsuo, other recurring characters include his owl companion Stolas, Ricott Pronema, a detective with a strong sense of justice, and Knochenfresserin, a demon with her eye on Asutsuo's soul.