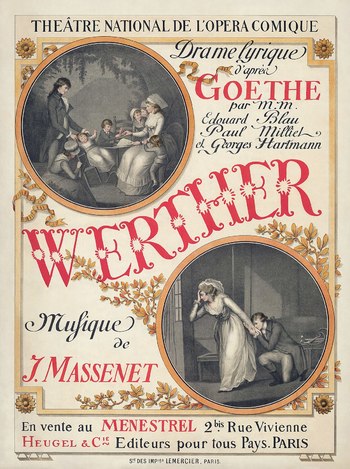 The poster for the premier of the opera in 1893

Werther is an opera in four acts composed by Jules Massenet, set to a French libretto by Édouard Blau, Paul Milliet, and Georges Hartmann, and adapted from The Sorrows of Young Werther by Johann Wolfgang von Goethe.

Set in Wetzlar within the period from July to December around 1780, the story tells of Werther, a young poet, who falls hopelessly in love with Charlotte, the eldest daughter of a widowed bailiff with young children. However, much to his despair, Charlotte has already promised her deceased mother that she would marry Albert, the perfect suitor for her. Not only does Charlotte renounce her attraction, but she pleads with Werther to leave, but promises to meet him on Christmas. This sends Werther into a spiral of despair, until he sees no other outcome for the separation but death, and thus shoots himself with Albert's pistol on Christmas Eve. Charlotte arrives too late to save him, and can only hold a mortally-wounded Werther as he dies in her arms, now at peace after she finally confesses her love to him.

Massenet's opera first premiered on February 16th, 1892 at the Hofoper (now the Vienna State Opera) in Vienna, but as a German version. The French-language premiere followed in December of the same year at Geneva, and the first performance in France was given by the Opéra-Comique in Paris in January 1893. Today, the opera has been regularly performed and has been recorded many times as well. And while the title role was originally written for a tenor, it is very occasionally performed by a baritone from time to time.