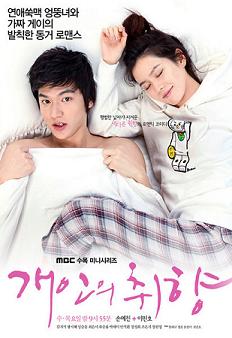 Gae In gets some loving.
Advertisement:

Personal Taste (Hangul: 개인의 취향), also known as Personal Preference, is a Korean Series that aired on March to May 2010 on MBC Network.

Park Gae In is the daughter of a famous architect, living in the unique family home named "Sanggojae" and making a modest living by designing and building furniture.

Jeon Jin Ho is a workoholic architect who longs to beat the Han Family, who took over his house and family business after his father's death. In order to gain a competitive edge in a race to design the new Dahm Art Center, Jin Ho manages to gain access to Sanggojae by pretending to be a homosexual boarder.

At the other end of the spectrum is Han Chang Ryul, the cad ex-boyfriend of Gae In, who runs the rival architect firm that is also in the running for the Arts Center.