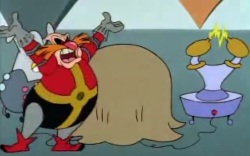 When it comes to hamminess, Robotnik really is in a position to give himself a prrrromotion.
"You dumb bots wouldn't know success if it bit you on the bumper! While I... the baron of badness... the knight of nastiosity... am on the brink of my greatest success!"
— Dr. Ivo Robotnik, from Adventures of Sonic the Hedgehog