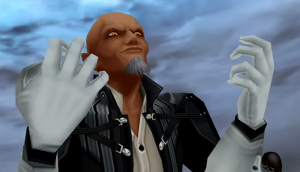 Admirably done! I knew this was a journey you could make! Over the unseen wall that divides evil and ham! And I was not wrong, Troper!
"More disturbing is Harlan Ellison as the voice of AM (the evil supercomputer which has imprisoned the five protagonists), which may as well be renamed HAM after his over-enthusiastic performance."
— GameSpot's review

of I Have No Mouth, and I Must Scream
Advertisement:

Pixels are all you need for an overactor.