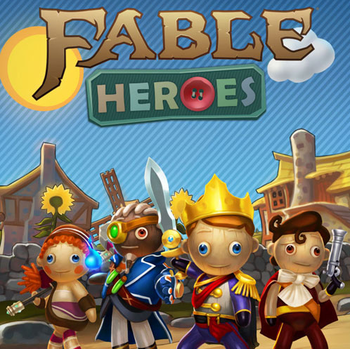 Fable Heroes is an Xbox Live Arcade title from Lionhead Studios, released on 2 May 2012 for 800 Microsoft Points.
Advertisement:

The players take the role of hero puppets of various characters from the main Fable series, both heroes and villains, and battle through levels based on locations from the series. Gameplay is mainly of the side scrolling Beat 'em Up variety, with occasional minigames. Up to 4 players, online or offline, can play together at the same time, with spaces filled by AI.

As with the previous Fable tie-in games, gold from this game can be transferred into the upcoming Fable: The Journey. There are also a couple of hero puppets that can be unlocked by playing that game.