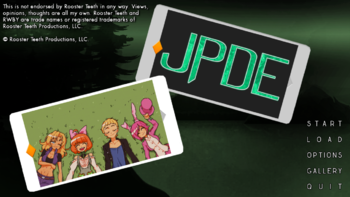 Project JPDE, more commonly known as simply JPDE, is a fan-made freely distributed visual novel created by Tumblr user Meinos Kaen. It is based in the world of RWBY, a popular web series created by Austin-based company Rooster Teeth.

JPDE is played from the view of The Protagonist David di Kabegis, a strange newcomer to the world of Remnant who arrives through meteoric crash landing. Upon first awakening, with a dreadful case of amnesia, he encounters Penny Polendina, and from there the game kicks off as David attends the notable Beacon Academy to train as a Huntsman with combat skills he is unaware of ever obtaining. The team is rounded out by The Leader Jacqueline B. Ivory and Bunny-Ears Lawyer —emphasis on 'Bunny ears'— Evelyn Damerot.

The game's story begins from RWBY's Volume 2, and at the moment, has plans to reach and go past Volume 3. The story itself runs congruently with RWBY's canon story- while events from this story are at times referred to, for the most part the adventures of Team JPDE are self-contained.

Behind the game's actual story, an optional part of the game involves spending time with other characters from RWBY and, slowly but surely, forming a relationship with them. Meinos Kaen has made the lofty claim that he will give at least every female character introduced pre-Volume 4 their own route.

Its official Discord server can be joined here: https://discord.gg/Q5zkg3K

The game is also playable in Russian.