Characters of the Yin Yang Yo! cartoon 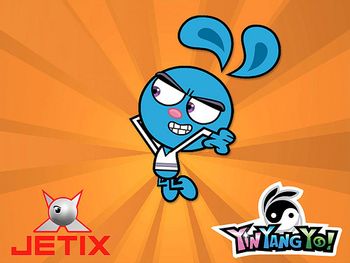 A blue, male rabbit and the twin brother of Yin. He mostly uses the Might side of Woo Foo, but he can also use the Mystic side of Woo Foo. Yang is a Cloud Cuckoolander, lucky, courageous, and has a liking for clowns. Despite not usually showing it, he really cares about his sister and Master Yo's well-being. He enjoys fighting, and likes hitting stuff. 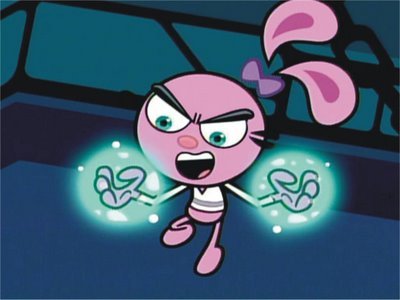 A pink, female rabbit and the twin sister of Yang. She mostly uses the Mystic side of Woo Foo, but she is also skilled in Martial Arts. Yin is often described as intelligent, cute, girly, and sassy, but she's often as stubborn as her brother while being a "neat freak" and a "control freak". Yin generally has a good sense of right and wrong, and will often do the right thing. 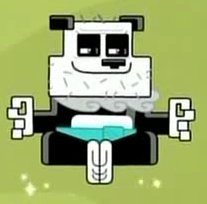 Teacher of Yin and Yang, Yo is a grumpy old panda whose age is unknown though implied to be a centenarian (as he'd missed his 117th high school reunion). Yo has great sage wisdom and is a master in the Woo Foo arts, but is also pretty lazy and prone to lounging around. Master Yo mentors Yin and Yang in the Woo Foo way to save the world, but it wasn't his choice; the spirits of past Woo Foo warriors stopped him from watching a movie called "Who Stole the Cookie" until he decided to do it. He's able to use both might and magic and has moves that Yin and Yang have no clue about.

An aqua-green female dog, Lina is Yang's girlfriend (after "Gone-A-Fowl") and Yin's best friend. She is a nice, yet short-tempered girl who lives on a farm with her father. She was first introduced in "Beetlemania", when Yang pretended to be a Woo Foo Warrior in order to impress her, but his plan backfired after he had to fight a giant steel beetle; eventually, Yin was able to get Yang to tell the truth. Lina is often unafraid to state her opinion and even talks back to her father. She was trained by Yin and Yang to use Woo Foo and is the second-in-command of the Woo Foo army Yin and Yang gathered together. 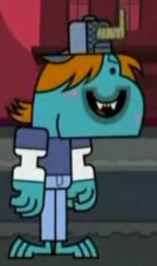 Logically the son of Yin and Yang's part-time enemy, Roger the Skelewog. At first, Roger Jr. was a bully to Yin and Yang, having mock fights with Yang and teasing him and Yin, but, during "Woofoogeddon", it was revealed he longed to be Yang's best friend. Roger Jr., being a monster, has displayed super strength, such as when he easily took out a whole group of the Night Master's soldiers just by running by them with his arms. He is also a member of the Woo Foo army Yin and Yang gathered together. 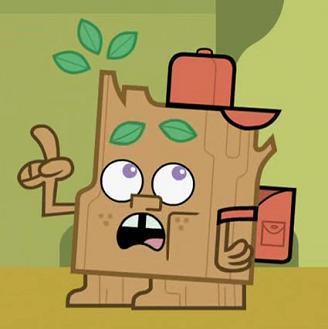 A magical talking tree stump, Dave is a low-life and is considered pathetic by his friends. Many times, Dave is often caught in the crossfire of battles or hurt in some way by friend and/or foe. He's considered whiny, talks nonstop about his family of trees, and is never noticed. As discovered in Stuck, Dave has the ability to communicate with and manipulate non sentient plants. This apparently surpasses that of the other characters. He is now a member of Yin and Yang's Woo Foo army. 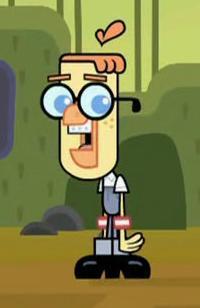 A nerdy chicken who appears to be scared of any threats and has a huge crush on Yin but because she never returned any of his feelings, Coop joined the Night Master in exchange for the promise to have Yin when the world was taken over. He is a minor villain and he is seen with some of the other villains in the Yin, Yang, Yo intro in season 1. Coop gave the impression of incompetence, but in reality, he had powers and abilities rivaling Yin and Yang's; in the end, Coop couldn't bring himself to go through with the Night Master's plans and held him in place so Yin and Yang could destroy him. Eventually, he returns and ends up overwhelmed by the power of the Night Master, temporarily becoming evil before snapping to normal and going off to train and gain control. Upon doing so, he joins the Woo Foo army. 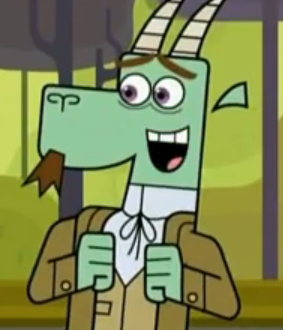 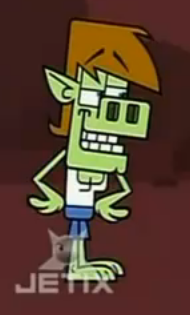 A Redneckistanian practicing Woo Foo, while being disliked by his teachers, Yin and Yang, as a stupid, smelly hick; however, when he finally gets the time to clean himself up, he reveals himself to be a smart, well-groomed young man. After defeating the Chung Pow Kitties, Jobeaux reveals his knowledge of Yin and Yang's disrespect and returns home to marry and live in a castle of diamond-encrusted grits (which Yin was fantasizing about before they met). He has a pet armadillo named Fuzzy Thunder that hides in his mouth, giving him a hick accent. 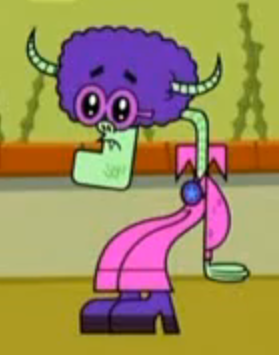 The Boogie Man is a disco-loving green monster that helps Yin and Yang defeat Pondscüm, Zarnot, Fastidious and Mastermind in "Roboticus Maximus". When the two rabbits were looking for a sidekick to boss around, they chose him. Eventually, they put him in charge over them which lead them to a victory. He became part of the Woo-Foo army they gathered. 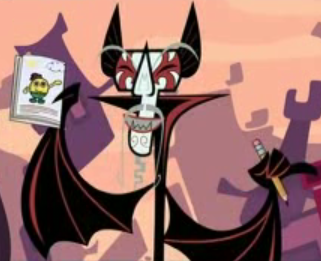 Billed as a "Dark Overlord in an Evil Class All By Himself", the Night Master is a very powerful and dangerous foe who was responsible for the near extinction of Woo Foo by eliminating all of the Woo Foo knights except for Master Yo. The Sensei managed to turn Night Master's army to stone and sent him into hiding for a hundred years until he tricked Yin and Yang into using Woo Foo in order to free his army. The Night Master appears to be a demonic sorcerer bat (as such, he hates light) of some description and has a liking for Gothic, ostentatious outfits. 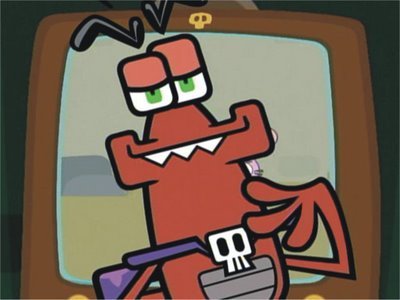 Carl, the Evil Cockroach Wizard (who tends to shout out his name as much as possible and always wants to be called Carl the Evil Cockroach Wizard), continuously schemes to defeat Yin, Yang, Master Yo and the power of the Woo Foo with his insecure genius. He also lives with his overbearing mother Edna, who is a dragon (it makes no sense as to how they are related). Carl is always trying to find a way to impress his mother and out-do his brother Herman. Despite his desire to win his mother's love, Carl is resentful and has talked back (usually under his breath), made her cry, and even put a spell on her. 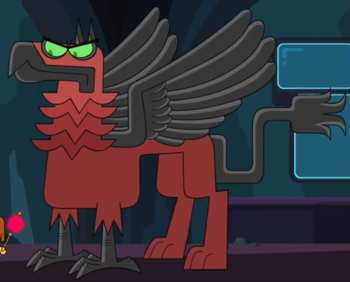 A mighty Gryphon who is bent on destroying Woo Foo. As revealed in "Welcome To The Dark Tomorrow", he is in fact the first and original Night Master. After his demise (of unknown cause), other beings of darkness took on the mantle of evil he left behind including an unknown snake lady and the bat-creature Yin and Yang faced in season 1. His deceased minions posed as the ghosts of the Woo Foo Elders to manipulate Yang into collecting the items of power needed to revive him. Tricking Yang into throwing the items into the Night Master's fireplace at the stroke of midnight, Eradicus was instantly resurrected. 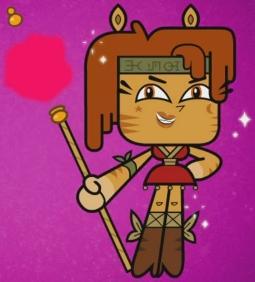 A female villain who can read minds. She is the smartest one of Eradicus's minions, though her blunt corrections often get her zapped by Eradicus. Eradicus also forced her into tuba lessons, and can play polka music. 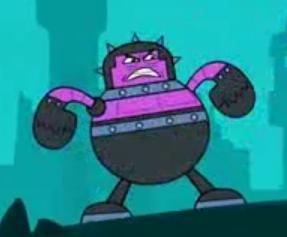 A villain who has nearly impenetrable armor and can bowl over nearly anyone. He can be best described as unintelligent. 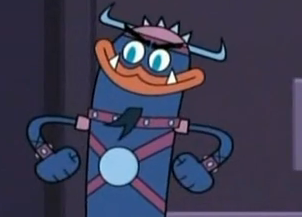 A villain who can stretch himself into any shape and any person. He loves cracking bad jokes. His name is a portmanteau of the gag toys Rubber Chicken and Rubber Ducky. 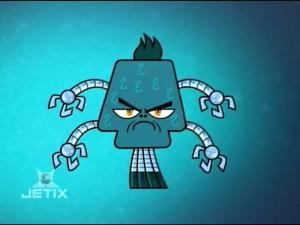 A villain who can shapeshift and regenerate his limbs. 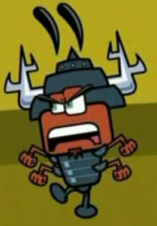 Carl's black-hearted, sadistic, selfish and evil ant brother, Herman, is a tyrannical ant warrior who rules his kingdom with an iron fist, a diabolical mind, and impeccable table manners. He is also quite the mama's boy. He attempted to take over the world until Master Yo stopped him. 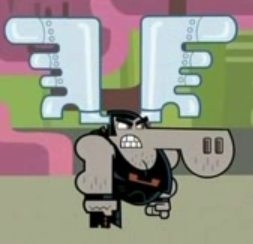 Ultimoose is the ultimate Night Master lackey: tough as nails, a master at Moose fighting, and really, really dumb, despite his shortness and strong antlers. He seems to offer work under the Night Master but is merely a dim-witted pawn. 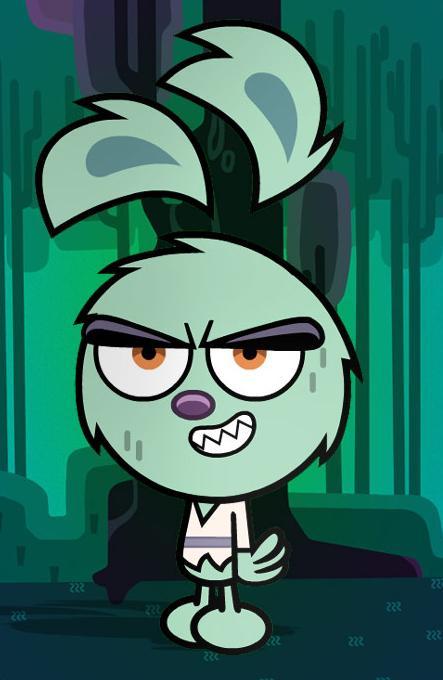 Yuck, a turquoise-green rabbit with terrible hygiene, is an entity formed from Yin's obsession with control and Yang's aggression. As a disgusting, mutant rabbit, Yuck wants more than anything in the world to be the greatest, most powerful Woo Foo Knight of all time. 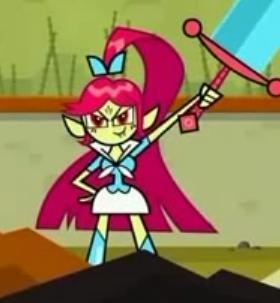 A hyper-active female who was, supposedly, Yang's girlfriend. It turns out she was using him to fight against her brother, who in turn, captures Yin to fight against Smoke. Yin and Yang eventually capture the two into Smoke's Prison Prism. 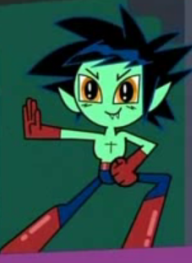 Smoke's rivaled brother. When Smoke uses Yang in the tournament, Mirrors obtains Yin to fight her. Yin and Yang managed to use one of the Forever Friend Prisms to imprison Smoke and Mirrors. Mirrors' hairstyle resembles the hairstyle of Goku from Dragon Ball Z. He appears to speak in a way mocking most anime, by stopping and starting at odd intervals. 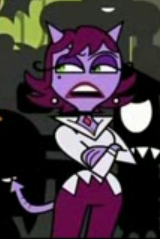 With an outfit & magic wand for every occasion, Saranoia is a powerful sorceress and mistress of disguise. Deeply sexist and obsessed with female rights, she is determined to free Yin from studying Woo Foo and take her in as her disciple. She had a terrible childhood and always thinks men are like her lazy brother Mark and her boy-favoring wizard father, who she mistakes Yo as, just as she mistakes Yang for Mark. 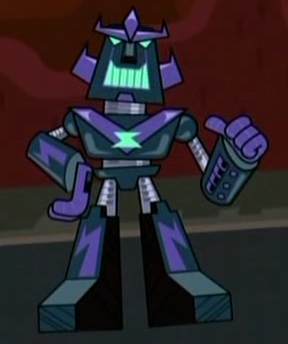 Once Yang's favorite toy, Zarnot is an evil action figure brought to life by the Lie Fairy, hell bent on destroying Yang. 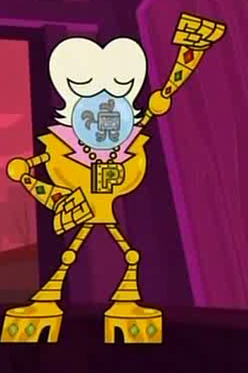 A street, Swedish, fish inside a robot suit. His being a "Swedish fish" appears to be a reference to Swedish Fish candy. He is obsessed with "bling-bling", and will get it at all costs; however, he truly carries a Swedish accent. 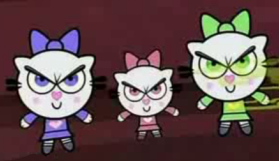 Are little, furry and adorable kittens (at first glance), but they are really evil and heartless ninjas. They usually wear dresses red, blue and green. 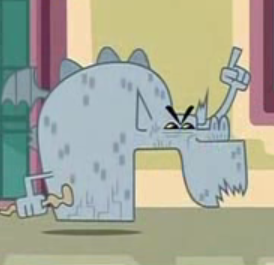 A gargoyle who is about a "bazillion" years old, Kraggler used to be a great and powerful warrior and Master Yo's arch enemy. Reduced to a feeble old man, after he broke the time traveling hour glass he got the power to drain the youth from anything, or give his age to anything.

An evil mittens-wearing wizard who was a big threat years ago; now he's just a brain looking for a body to regain his reign of evil. 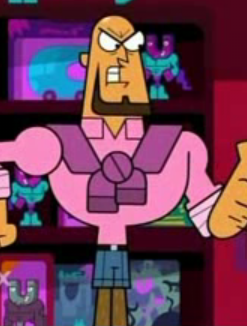 A half-man with hairy hooves, but all man (that is if one would count collecting comic books and action figures manly). He is a large man with a bald head who dresses like a city man.