Memes / Revenge of the Sith 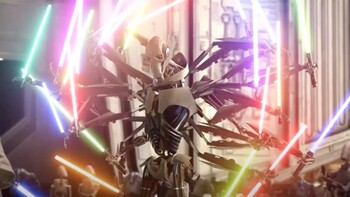 You fool! I've been trained in your meming arts by Count Dooku!
Windu: In the name of the Galactic Memes of the Republic, you are under arrest, Troper.
The Senate: Are you threatening me, Master Troper?
Windu: TV Tropes will decide your fate.
The Senate: I am TV Tropes!
Windu: Not. Yet.
The Senate: It's treason, then...
Revenge of the Sith may be the most memetic of all Star Wars films, especially after the memes got a massive surge in early 2017. An entire subreddit

was created just for them and other prequel memes. Obi-Wan in particular is a Fountain of Memes, though Palpatine/Sidious/the Senate and Anakin are no slouches either.
Advertisement:

open/close all folders
Memes quoting Obi-Wan Kenobi
Obi-Wan is a Fountain of Memes:
Memes quoting Palpatine, the Senate
Palpatine (aka the Senate) is a Fountain of Memes:
Memes quoting Anakin Skywalker/Darth Vader
Advertisement:
Memes quoting other characters
Other memes
Backstroke of the West
The Chinese bootleg version of the film, known as Star War: The Third Gathers: The Backstroke of the West, has spawned a bunch of memes due to its hilariously bad English translations. The memes increased when it was adapted into a Gag Dub.
General Grievous: Your memes will make fine additions to my collection.

Alternative Title(s): Backstroke Of The West