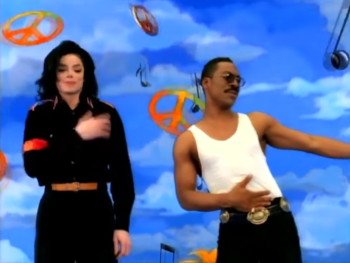 The 90s were weird.
"I think rock and roll is really funny when it's serious."
— Bowling for Soup, "I'm Gay"
Advertisement:

Some songs are just meant to be easy to listen to. Others try to tell a story. The story to some of these seems to be: "Why are you laughing or groaning? This is Serious Business, damn it!"

Remember that this is YMMV; more so than usual because music is arguably the most subjective medium. One person's font of Glurge is another's genuine Tear Jerker. Please, please, please don't start an Edit War if your favorite artist/song/genre of songs is listed here.

open/close all folders
Country
Electronic
Emo
Advertisement:
Folk
Heavy Metal
There are some who enjoy the over-the-top, exaggerated and silly nature of Metal, and there are those that... don't.

Also, yes, he said "Arockalypse" and "Day of Rockening". The latter is followed by what the thick accents turn into an endorsement for Hooters.

The bit at the very end, where the singer whispers "Are you dead now?".

That is not even counting what the titular 'Love Gun' actually IS...

Watching the film of the production doesn't help. Lambert's mouth does some... bizarre contortions at the end.

The histrionic manner in which the singers deliver these gems adds to the hilarity.

Then a few lines later, the opening lines of the chorus...
"But if you see me walking bye And the tears are in my eyes
Look away, baby, look away!"
From trying to be a good sport to shamelessly trying to guilt-trip the ex-girlfriend the singer is addressing...

They drink a six pack in the car... and then they both drive away from each other.

The entire song is like that. By the time he hits the Glory Note at the end, you half-expect him to burst into tears. Then again, this fella should be sad. This song is a beautiful, lyrical Obsession Song. To put things far less lyrically than the lyrics, the honest answer is "no" — but he doesn't want to give that answer. He does want her and need her, and he speaks of that in some detail. He also waxes eloquent about his inability to express himself... This is the chorus.
And sometimes when we touch
The honesty's too much
And I have to close my eyes and hide
I want to hold you till I die
Till we both break down and cry
I want to hold you till the fear in me subsides
In short, this is either severe Narm or a serious Tear Jerker. (We laugh so that we do not cry.)

The music video is narmy too.

However, the lyrics heavily imply the song is about oral sex, in which case the above is kind of justified.

It's a good Power Ballad, but it fails the logic test here. Fittingly, the lyricist is Diane Warren, already mentioned in the Pop section.

It doesn't help when you keep expecting the second line of the above to be "I'm gonna go eat worms".

Despite the cheesiness, the song still manages to be stirring.