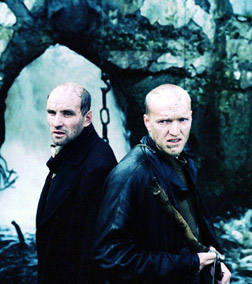 "A film about three men walking through the wooded territory, two of whom are mostly calm, and the third is constantly afraid of something."
— A popular recap of unknown origin
Advertisement:

Stalker (Сталкер in Russian) is a 1979 Science Fiction film directed by Andrei Tarkovsky. Shot in Estonia, it is an adaptation (albeit a very loose one) of the Strugatsky Brothers' sci-fi story Roadside Picnic, who also wrote the film's script.

The film takes place in and around a devastated partially industrialised landscape called The Zone. At the centre of The Zone lies a location called The Room, which is said to grant the deepest desires of those strong enough to make it there, avoiding the numerous hazards for which The Zone has a fearsome and lethal reputation.

Our three main characters meet in a bar outside The Zone. They are only named by their professions: Stalker, Writer, and Professor. Stalker is the protagonist and bears the name of a class of semi-professional guides who are skilled at infiltrating the security cordon surrounding The Zone and avoiding the many hazards within it. Stalker regards The Zone with something close to religious awe and treats it as a temperamental deity to be appeased and wondered at. Writer is an urbane, fashionable, cynical author with a drinking problem. He has lost his inspiration, and believes he might regain it via the power of the Zone. Professor is a taciturn physicist, who appears to have no particular reason to visit The Zone, and a small backpack that he is very attached to.

The video game of the same name could be said to be loosely inspired by this film. Very loosely. It is more correct to say that they share some features in common because they draw on the same original inspiration.