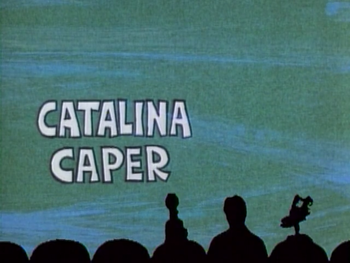 "So what's a Catalina Caper?" "It's one of those little balls you find when you're eating peeled shrimp."

Catalina Caper holds the distinction of being the only comedy film riffed on the show. There's a good reason though, as explained below. It was also the first time the Brains would lose the rights to the movie being riffed, leading to it being left out of reruns.

Thankfully, it is available on Shout! Factory TV here

This MST3K presentation provides examples of: