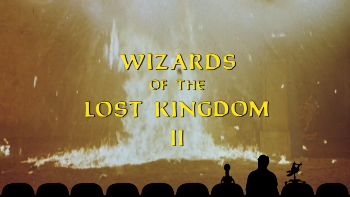 "The sophomore year! Yeehaw!"
Kinga Forrester: Now, we know Wizards of the Lost Kingdom was a hard experience for you. Good news! Today, you're watching the sequel.
Jonah Heston: That's not good news!
Kinga Forrester: Yeah, I didn't say it was good news for you.
Advertisement: