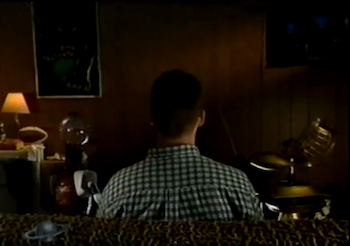 This movie looks kind of familiar, doesn't it?
Mike: (laughs) It doesn't really seem like he comes out ahead.
Crow: Mwa ha ha ha ha ha ha— Hey! Who turned out the lights??
Servo: ('Fine' appears onscreen) This has been the official biopic of Larry Fine.
— The last lines in the theater
Advertisement: