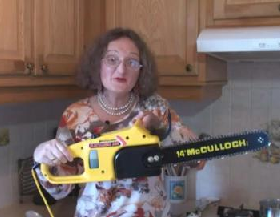 Internet Mega Chef Titli preparing an egg
As-salamu alaykumnote  Arabic for “Peace be upon you” and welcome to Titli's Busy Kitchen with me, Titli Nihaan.
Advertisement:

‘‘Titli’s Busy Kitchen’’ is a both humorous and highly informative Cooking Show hosted by Titli Nahaan. In every episode, Titli prepares food from around the world from simple to emulate recipes, also with heavy chunks of physical and visual humor.

The series originated on YouTube and found an audience over the years thanks to the simplicity of many of Titli's recipes, the caring "aunty" side of her personality and the aforementioned physical humor. Above all else, Titli's philosophy is that anyone can cook delicious recipes from any country.

Due to the changing nature of ad revenue on YouTube, newer videos are posted less frequently than they were in the past, but are still informative and humorous nonetheless. The show can be viewed here

, along with her secondary show The Bread Kitchen here.