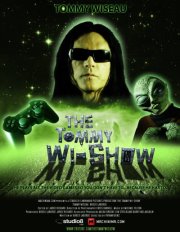 He plays all the video games so you don't have to... because he has to.
Advertisement:

is a Web Original comedy series found on Machinima's YouTube channel directed by Payman Benz and starring infamous filmmaker Tommy Wiseau, creator of The Room as T.W. and Brock LaBorde as Alien.

The show's premise is that at the start of every episode, an unnamed alien working for a mysterious council abducts "T.W." to a secret moonbase, and forces him to play a video game for some unknown purpose. Unfortunately, T.W.'s video game skills seem to be somewhat lacking. Hilarity Ensues.

You can buy the Season 1 DVD here.

Not to be confused with the Nostalgia Critic skit.

Games that T.W. has played (in order of episodes):