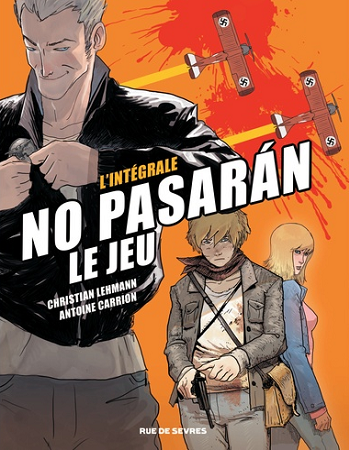 The cover of the graphic novel version.
"Are you ready... for the Ultimate Experience?"
Advertisement:

No pasarán, le jeu is a French science-fiction novel from 1996, written by Christian Lehmann.

Eric, Thierry and Andreas are three French teenagers who are on a class trip in London. They are all passionate PC gamers and discover a shop called "Game Frenzy" where they find good bargain computer games. The old shopkeeper, however, is shocked by Andreas - a far-right fanatic carrying some relevant symbols - and gives them mysterious game disks to play.

As they return to France, they play the game on the disks which proves to be stranger, more powerful and more dangerous than they could ever imagine.

No pasarán, le jeu provide examples of the following tropes: