Fanfic / The Unabridged Memoirs of Darth Plagueis the Wise 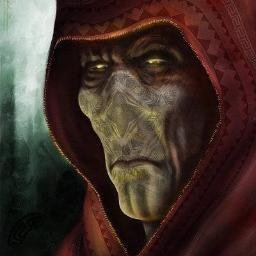 Now it was my turn to gloat. "Oh, Sidious. You never did show much interest in learning about Force illusions. Perhaps you should have spent less time rehearsing your monologue and more time practicing. Now, I'm afraid, it's too late." I fastened my Force grip tighter around his heart. By now the organ was unable to pump blood at all, muscles desperately twitching and fluttering. If he had been born a Muun, one of his other two hearts would have picked up the slack and he might have been able to resist. But alas, evolution had a sense of humor when shaping the human species. Sidious' legs buckled and he collapsed to his knees. He snarled up at me, struggling for breath as his face started to take on a bluish cast.
— Darth Plagueis
Advertisement:

Written by YeahOkayCool on AlternateHistory.com, The Unabridged Memoirs of Darth Plagueis the Wise is a Star Wars alternate timeline.

What follows is a rather different story to the one we all know.

, and is mirrored for non-AH.com members at Sufficient Velocity

. The version on AH.com has since been closed due to the author being banned, however.