The characters from the game Tales of Symphonia.

SPOILER ALERT: NOT ALL SPOILERS ARE MARKED. 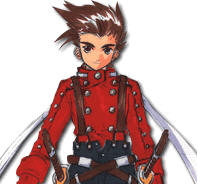 "Dwarven Vow #1: Let's all work together for a peaceful world."

A 17-year-old human who was raised by a dwarf, Lloyd leaves his home town of Iselia to follow his childhood friend Colette on her World Regeneration journey after having been banished from the village, where he's held responsible for the attack they suffered from the Desians. At the beginning of the game, Lloyd is a typical overly idealistic Idiot Hero, but he grows upon discovering the world as it is, making his idealism into a goal to save both worlds and everyone living inside it.

"Even if I lose my body, my heart will still be free."

Lloyd's 16-year-old childhood friend who was raised with the knowledge that she was The Chosen One, and, that when the time came, she'd go on "a journey to regenerate the world," where humans are often treated by cattle by the Desians, an organization comprising mostly of half-elves. 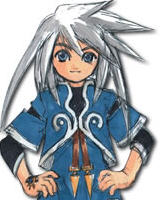 Lloyd's other childhood friend, Genis is a young elven boy who was raised by his sister. 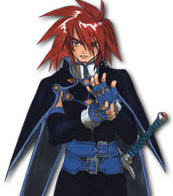 A stoic mercenary who just happens to be passing through the vicinity to save the Chosen's life and be offered the job of protecting her during her journey. Kratos speaks little, smiles less, and gets angry once every blue moon; this, combined with his superb swordsmanship, makes him the epitome of badass according to Genis, but a perpetual thorn in Lloyd's side, who tries his best to earn the older man's respect.

Genis' older sister who took care of him. Raine is Iselia's schoolteacher, and she leaves to accompany Colette on her journey before Lloyd and Genis do. She starts off as very cynical, but over the course of the game, she trusts Lloyd more and more to achieve his idealistic world. 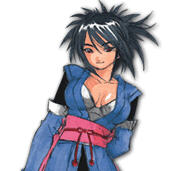 Sheena starts as a sympathetic antagonist; her first attempt to kill Colette fails due to her own clumsiness, and subsequent meetings highlight her niceness and sincerity as a person. It comes as no surprise when she joins the party after discovering what's going on in Sylvarant human farms. Later, she reveals she comes from the ninja village of Mizuho, from the parallel world of Tethe'alla; in spite of her attachment to her world and her village, she consistently picks the 'right' choice over blindly following her orders, even when she knows she will be punished for it. Her powers as a Summoner are essential to the second half of the game. 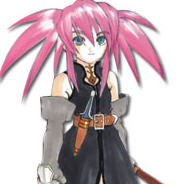 A 12-year-old Tethe'allan lumberjack, Presea seems entirely devoid of emotions when the party meets her. It's quickly discovered that her emotionlessness results from the experiments to turn exphere's into cruxis crystals that were conducted on her; the party makes it their goal to cure her, since they reason that the process can't be too different from the one they are already searching for to cure Colette.

"Whatever will be will be."

Tethe'alla's 22-year-old Chosen One, Zelos has all the appearance of Handsome Lech, provides much of the comic relief in the second part of the game, and is generally the party's Butt-Monkey. Among the aristocracy of Tethe'alla, he's extremely popular and a regular The Casanova, and retains the common prejudice against Half Elves. However, he also proves his practical nature by discarding said prejudice, based upon his own experience with the party; in the moments when he is serious, he regularly shows himself to be the most cynical member of the party, and one of the most observant, especially towards Sheena, whom it's implied he may have feelings for. Confirmed in the Interquel novel. 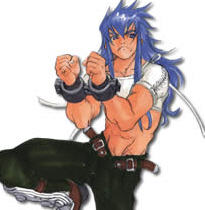 A mysterious convict who is first sent after the party but defects to join them once he catches sight of Presea, Regal is extremely discreet about his past and refuses to take off his shackles — they are the symbol of the sin he committed and which he has to atone for. 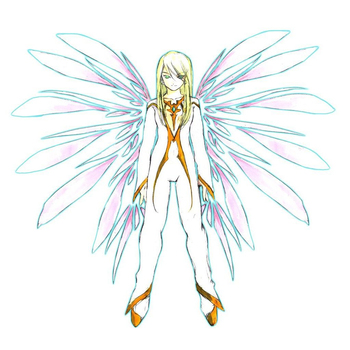 Yggdrasill is the leader of Cruxis and the Desians, a self-righteous antagonist who has the world under his spell. He's also Mithos, the young half-elf the heroes "rescued" from a burning village - who becomes Genis' first half-elf friend, who worries for Raine when she looks tired, who makes jokes at Zelos' expense like everybody else... until he reveals himself to the party when one of his most trusted lieutenants, one of his companions from 4000 years sooner, proves himself to be a traitor.

The five leaders of the Desians.

Tropes associated with the Grand Cardinals:

The leader of the Five Grand Cardinals and Yggdrasill's right hand.

The Grand Cardinal in charge of the Iselia Ranch.

The leader of the Palmacosta Ranch.

The leader of the Asgard Ranch.

The leader of the Remote Island Ranch and one of the main Desian researchers.

An Angel sent down from Cruxis to guide Colette on her Journey of Regeneration, Remiel is said to be Colette's true father and tells her of the locations of the seals in Sylvarant. Or so we think...

A ninja from Mizuho, Kuchinawa is a childhood friend of Sheena's and brother of Orochi. It is revealed that Kuchinawa bears a huge grudge against Sheena for failing to make a pact with Volt, and he is actually working with the Pope and Vharley to try and capture the party. Eventually, he challenges Sheena to a duel and leaves Mizuho in disgrace.

A dog-like companion of Lloyd.

The leader of the Renegades, a group of half-elves who oppose the Desians. Both cynical and ruthless, he was one of Mithos' companions and is currently one of the Seraphim of Cruxis, although he is no longer loyal to Mithos.

The Goddess worshipped by the church that bears her name. She is said to sleep at the center of the world out of grief for the sacrifice of her hero, Mithos. The Journey of Regeneration is a mission to awaken her so she will bless the world with mana once more.

A strange girl who lives with Altessa and assists him. She speaks in a robotic voice.

Lloyd's late mother, who died many years before the beginning of Tales of Symphonia. Lloyd soon learns that she was murdered by the Desians and this, along with their attack on Iselia village, inspires him to seek revenge against them. While she never appears in-game, the effect that she had on certain people resonates very strongly throughout the story.

Lloyd's adoptive dwarven father. He is one of the few dwarves to have left the underground or and not work for Cruxis.

An old woman at the Iselia Ranch that Genis befriends and the mother to Cacao and grandmother to Chocolat.

The ruler of Palmacosta, the only city that actively resists the Desians. In reality, he secretly collaborates with them in order to cure his wife.

A half-elf who works (and lives) in the basement of the Imperial Research Academy in Sybak and conducted experiments on Presea.

Zelos's younger half-sister, who lives in the South-East Abbey due to being ill officially, anyway, the real reason is that she's under house arrest for her mother's crimes, though she is finally able to leave after the main events of the game. In part due to a tumultuous family history, the siblings don't have a great relationship, although when it comes down to it they care deeply for each other.

A ninja from Mizuho and Kuchinawa's brother. Orochi is Sheena's childhood friend and one of her most ardent allies and supporters. His parents were among the victims of the Volt incident, though he doesn't maintain a grudge against Sheena for it unlike Kuchinawa.