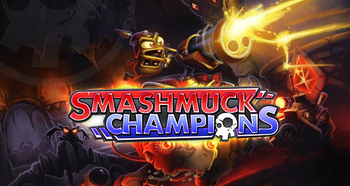 SmashMuck Champions was a F2 MOBA by KizStudios. It was first released on PC in 2012 and lasted there until 2016. Later on, it was rebranded as Transgalactic Tournament, and brought to PS4.
Advertisement:

In the planet of Muck, you're hard-pressed to find a bigger sport than SmashMuck, the brutal, fast-paced, no-holds-barred team-based beat-down as an assortment of Champions, one team Red, the other team Blue, try to steal the enemy's Plunderball while guarding their own, duke out for control in Conquest, wreck the enemy's towers and base while preventing the same from happening to theirs in Siege, assist their very own mechanized monster destroy the other team's juggernaut in Destroyer, or just work together to survive the Gauntlet.

While the game is similar to most MOBAs in many respects, SmashMuck is unique in that it is very, very fast paced; match times average from less than 5 minutes, up to 20— or worst case scenario, 30—and it takes less than five seconds for you to get killed if you stop moving.

Adding to that, despite it's simple controls, there is a deceptively high skill-ceiling to it. A person who knows how to play certain Champions will easily decimate the competition, and even a fully-geared level 40 Coach can get bested by new players.

It is also very, very weird and comical, with plenty of personality to spare. This is a game where Dragons, Yetis, Rogue Sentient Robots, Animate Statues, Vampires, Yeti Hunters of a bygone era, Pastry Chef Sludge Monsters, Ancient Gladiators, Minotaurs, Sentient Flora (bizarre, even by their standards), Ex-Forest Guardians, overenthusiastic Space Program Monkeys, aging Robot Veterans, super-prototypes of a deadly Robot Elite Force, Platypi avenging the death of their parents by becoming unicorns, Sharks with a degrees in Murder and robotic alter-egos, former all-girl, all-robot supergroup's "Bad Girl" keytarists and many, many more duke it out.

For concerns with its F2P model, there are pleasantly few real advantages to purchasing SmashBucks, the game's "Cash" currency. Free Boosts and SmashBucks are given fairly early in a Coach's career (but no more, after that), game changing equipment like weapons are obtainable through in-game currency and have no real difference aside from tailoring better to a specific play-style, and unlocking a weapon's true potential requires leveling it up through actual play.

There are also account upgrades. The cheapest (2 dollars) gives a permanent XP and in-game currency boost, alongside doubling all crafting gains from the Daily Challenge.

For those who really don't want to spend anything, there is a healthy rotation of Free Champions every week, with a good mix of Offense, Defense, and Support. All free players also get Minos, a durable if slow Offense Champion, unlocked from the very start.

The Game Provides examples of: