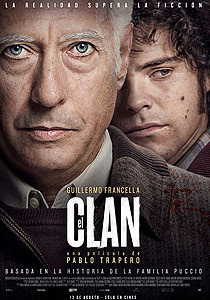 El Clan is a 2015 Argentine film, starring Guillermo Francella, and it is Very Loosely Based on a True Story.

The film is about the Puccio family, part of a scandal in the 1980s. The father Arquímedes Puccio kidnapped people during the National Reorganization Process, got huge amounts of money for their rescue, and then killed them. He was protected by a commodore, who endorsed his activities. He continued with it after the fall of the Process and the restoration of democracy, even when the commodore warned him that he was not able to protect him any longer. One family does not pay and arrange a fake payment with the police instead, who capture them, raid his house, and free their prisoner. They are all send to jail, and Arquímedes son, Alexis, tries to commit suicide.