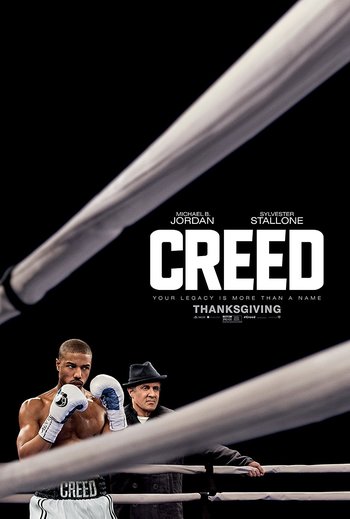 The one where Rocky passes the torch.

Creed is a Spin-Off of the Rocky franchise written and directed by Ryan Coogler. It follows Adonis Johnson (Michael B. Jordan), the troubled illegitimate son of the late former world champ boxer Apollo Creed, who against the wishes of his family has begun forging a career of his own as a boxer. Intent on becoming champ, he eventually travels to Philadelphia to seek out his father's old rival/friend Rocky Balboa and convince him to become his trainer. Rocky eventually accepts, but it is soon discovered that he, too, is facing a difficult battle, one that even Rocky may fail to overcome.

Released 9 years after Rocky Balboa. A sequel, Creed II, was released on Thanksgiving 2018.

A VR game called Creed: Rise to Glory was released in September, 2018.

Not to be confused with the

"When you get to the top, you think you can fly."