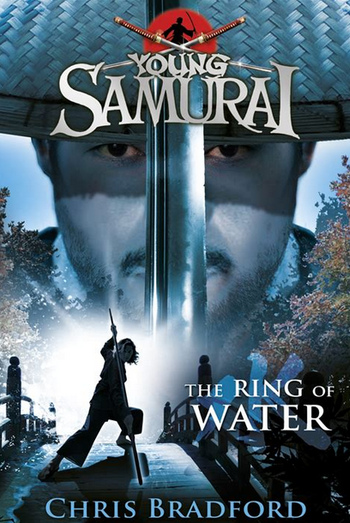 Young Samurai is a series of action-adventure novels set in the early Edo period of Japan, written by Chris Bradford. Jack Fletcher is a twelve-year old English boy and the son of the navigator of the Alexandria, a ship charting a course from England to Japan. When his father is murdered by the ninja Dokugan Ryu, Jack is charged with keeping his father's special navigational chart - the rutter - out of enemy hands. Washing ashore, he is adopted by master samurai Masamoto Takeshi, who inducts him into his school for samurai, the Niten Ichi-ryū. Despite being regarded as an outsider due to being a foreigner, Jack befriends several of his fellow students, including Masamoto's niece Date Akiko and (eventually) his son Masamoto Yamato. However, Jack yearns to return home to England in order to look after his sickly little sister Jess, left in the care of a nanny.
Advertisement:

The series consists of nine books: