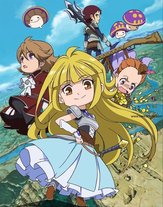 Mikoto, The Princess of Elua, who wishes to become a hunter, explores Driland, fighting various monsters in the process. Accompanying her is Wallens, her assistant, Polon, a musket wielder who aspires to be a hero, and Pann, a hunter with a spear. The group explores various treasure, meet other hunters, and save the world from a very horrible threat.