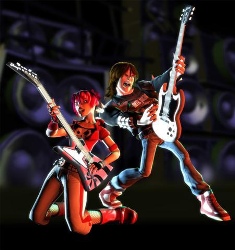 Originally developed by Harmonix, who are also the creators of Frequency, Amplitude and the Karaoke Revolution series, and went on to make Rock Band, Guitar Hero has become an extremely popular example of the Rhythm Game genre that plays like Guitar Freaks, but with five buttons instead of three and licensed songs.

From Guitar Hero III to Guitar Hero: Warriors of Rock, it was developed by Neversoft and published by Activision. Neversoft built their own Guitar Hero engine from scratch when Harmonix handed over the reins to work on Rock Band.

After Guitar Hero: Warriors of Rock (Released in late 2010), development of all games in the series (including spinoffs DJ Hero and Band Hero) were cancelled, the Hero franchise was discontinued by Activision in February 2011, and Neversoft's Guitar Hero division was liquidated. However, in April 2011, Activision changed their tune, claiming the series was now on "hiatus" and they claimed that a new game would be released in 2012, developed by Vicarious Visions and focusing solely on the guitar gameplay with a new redesigned guitar controller; however, numerous problems plagued the project and was subsequently cancelled. On March 31, 2014, all downloadable content for the entire series was removed

In October 2015, Activision released a reboot of the franchise, Guitar Hero Live, which dueled with Rock Band 4 when it launched in the same month. Developed by DJ Hero studio FreeStyleGames, the game utilized a new six-button guitar (not six in a row, however; six in two rows of three.), and replaced the classic 3D rendered stages with a first-person perspective of the guitarist using Full Motion Video. Following the disappointing sales of GH Live, the online servers shut down in 2018 and the franchise is again dormant. However, as of 2022 with Microsoft announcing their acquisition of Activision Blizzard, they have been teasing fans with the possibility of another revival of the series, but only time will tell. In the meantime, however, the fan community has taken the franchise into their own hands with fan works ranging from fan games made from the ground up (e.g. Clone Hero, Phase Shift) to modded versions of pre-existing games (e.g. Guitar Hero II Deluxe, Guitar Hero World Tour Definitive Edition), all of which allow for extensive modding with fan made charts and even custom characters as well as venues, resulting in the franchise having a resurgence in popularity as a Cult Classic.