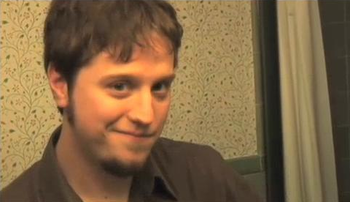 How can you be angry at that face?
Had enough with games that you hate?
Let's talk about some games that are great
I'd rather let other people know
About the underrated classics of old
Than bitch and cuss about shitty games
Like it's been done a million times before
He's the happiest gamer you've never heard
He's The Happy Nintendo Nerd
He's The Happy Atari Sega Nerd
He's The Happy Video Game Nerd
Advertisement:

Originating as the winning entry for GameTrailers' 2007 "Outnerd the Nerd" contest, this series began as a Video Review Show that is a self-proclaimed ripoff of The Angry Video Game Nerd. Derek Alexander, a.k.a. The Happy Video Game Nerd, copies the style of AVGN right down to the opening theme song (at least for his early episodes)... and then he inverts it. He genuinely likes most games he reviews, as his specialty is to review old school games that he thinks deserve more attention. To date, he has reviewed mostly classic games as well as recent titles.

He reviewed a technically-new game (Mega Man 9), but he did so because of the self-parodying Old School feel to it; he later reviewed 10 as well (and was much less kind to it). He also reviewed the new Rocket Knight and Splatterhouse games, as well. After a break from reviewing games, he started taking a look into video games from the seventh console generation.

The Happy Video Game Nerd (HVGN) is a deliberate attempt to contrast the trend of Caustic Critics on the Internet, and it's also a way to bring up old retro gaming classics that deserve a little more attention. Surprisingly, James Rolfe — The Angry Video Game Nerd himself! — subscribes to Derek's YouTube account.

Episodes of HVGN can be found on Retroware TV

the "Happy Video Game Nerd" gimmick and name, but has continued with video game reviews as "Stop Skeletons From Fighting" with Grace Kramer helping him out (and sometimes doing the videos herself) from time to time.

He also has side series as part of Stop Skeletons From Fighting like "Past Mortem" (a series looking back at certain points in gaming history), "Punching Weight" (a look at unique games that are bizarre in a sense), "Re:Certified Classic" (reviews taking a look at older yet highly-regarded video games and whether or not they stand the test of time) and recently "How the West Was Worst" (Looking back at bad localizations from Japanese game companies, so far he has covered Konami and Capcom).