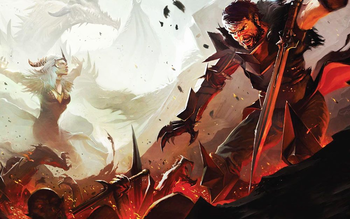 "There are men who struggle against destiny, and yet only achieve an early grave. There are men who flee destiny, only to have it swallow them whole. And then, there are men who embrace destiny... and do not show their fear. These are the ones that will change the world forever."
— Flemeth

The Blight has ended, and a new conflict arises. Just in time for another Fereldan to make their mark in the history of Thedas.

Demands of the Qun