Recap / My Little Pony: Friendship is Magic (IDW) Issue 1 to 4 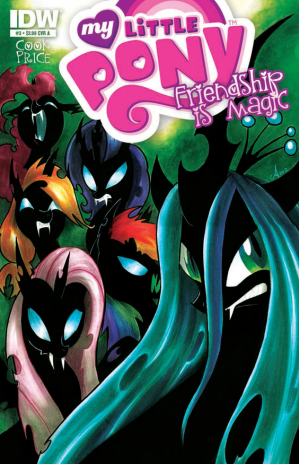 The Return of Queen Chrysalis

The Cutie Mark Crusaders are fillynapped by Queen Chrysalis, under the guise of an invasion of Changelings across Ponyville! The Mane Six quickly defeat the underlings and rescue the rest of the town, but find that Chrysalis has taken the fillies to her distant lair, and challenges the Mane Six to come rescue them in three days' time. Unknown to the trio, Queen Chrysalis, having taken over "Wuvy-Dovey Smoochy Land" after being ejected from Canterlot after "A Canterlot Wedding", and using the endless love of its cute cat-like critters to feed herself and her minions, now seeks to gain Twilight Sparkle's magic, using the CMC to lure her there.

With Princess Celestia out of pocket, Twilight Sparkle and her friends set off to rescue the fillies, with Twilight worried that Chrysalis' deadline just happens to correspond with the passing of the Secretariat Comet. Traveling through an abandoned Diamond Dog mine, Chrysalis sets her Changelings to split the six into pairs and then create resentment between them through the mimicking abilities. Though the Six regroup and defeat a pack of giant spiders before exiting the cave, the damage has been done, as the three pairs split off in separate directions to rescue the CMC. Each pair runs into its own sets of problems: a giant chupacabra, pony-eating jackalopes, and blood-sucking giant flowers, and as they all escape these, they run back into each other, letting their predators fight for dominance. After a series of apologies - and an ad hoc cake break from Pinkie - they continue towards Queen Chrysalis.

They finally make it to the Queen's castle and meet Chrysalis face to face. Queen Chrysalis traps Twilight's friends into her cocoons and challenges Twilight to either join her as her student in dark magic, or to have her minions kill her friends and the Crusaders. Twilight realizes she can't fight Chrysalis and opts to let her friends go, but this is further part of the Queen's trap - to now consume her love and control Twilight's magic for herself. As the Secretariat Comet passes overhead, both Twilight and the Queen feel a surge in their magical abilities, and fight each other with magic. Twilight succeeds after recalling how much the love of her friends means to her, allowing her to overwhelm the Queen with a powerful burst of magic that bests the Queen.

The Mane Six rescue the Crusaders and regroup outside the castle, along with the arrival of the battle-damaged Princess Celestia and Spike. Celestia apologizes for not being there sooner as she and Spike had to defend Canterlot from a horde of giant magical cocktrices which also tried using the comet's magic surge to cause trouble. As they all relate their tales, Chrysalis finds herself locked inside their castle, and having to deal with her minions entranced by Pinkie's animated costume silliness.