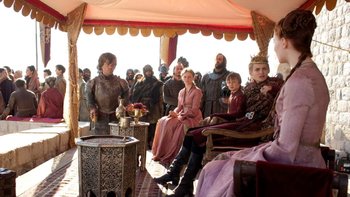 The episode begins in King's Landing with the Hound in a fight—that ends very quickly, as he knocks his opponent over the edge of the battlement they're fighting on. The opponent doesn't land so much as a splash on the courtyard below, and everyone claps.

It's Joffrey's name day tournament. Remember what Joffrey was like last season? Well, now he's having a man drowned in wine for arriving to fight late and slightly drunk, isn't that nice? Sansa, thinking quickly, gets the tipsy Ser Dontos off the hook with a little help from Sandor, but it's clear everyone is taking care not to offend Joffrey. Except for Tyrion, who shows up out of the blue and also shows up Joffrey completely.

Tyrion then proceeds to the meeting of the Small Council to show up Joffrey's mother as well. Tyrion is definitely not the brother Cersei would prefer to see right now, but she's stuck with him—he's filling in for Tywin as Hand of the King, after all. He suggests that Arya Stark would be a great bargaining chip in negotiations with Robb Stark, and is none too pleased when Cersei admits that she not only let Joffrey behead Ned Stark, she's lost his younger daughter as well. "We had three Starks to trade. You chopped one's head off and let another escape? Father would be furious. Must be odd for you, to be the disappointing child."

Meanwhile, back in Winterfell, Bran is bored with being the Lord of a castle, but he's soon livened up by a wolf dream and a red comet. Osha has this to say: "The comet means one thing, boy. Dragons." Cut to...

...the Red Waste. Dany is currently minus a horse, since her Silver has just dropped dead, and being plus three (incredibly good CGI) dragons isn't as marvelous as you might expect, especially since she can't work out what to feed them. Or any of her khalasar, for that matter, as they're running low on supplies. In an attempt to find food or civilization somewhere, Dany sends out her bloodriders on a desperate search.

We follow the red comet to the Land Beyond the Wall, where Jon, Mormont, Sam and their party have been travelling for some time, and are now arriving at Craster's Keep. The good news is: Craster has lots of daughters! The bad news is: the lads can't touch them. The ugly news is: they're Craster's wives, too. Eeeesh. 'Your house, your rules' never sounded so nasty before. Jon is understandably as creeped out as we are, but Mormont, also understandably, tells him to keep his mouth shut. Also, where are all of Craster's sons?

Then to Dragonstone, where Stannis Baratheon is having a nighttime bonfire on the beach. And by bonfire we mean he's burning the statues of the Seven at the urging of Melisandre, who has a thing for red and fire and who is seeking to convert Stannis to her religion. "For the night is dark, and full of terrors." Maester Cressen and Davos, Stannis's right-hand man, aren't too happy about that. Cutting to inside the castle, Stannis dictates a very exact letter addressed to all the lords of the Seven Kingdoms, revealing that the Baratheon family tree wasn't exactly forkingnote Or at least not with legitimate roots. Neither was the Lannister one, for that matter. It turns out that Maester Cressen is so unhappy with Melisandre and the road she's planning to take Stannis down that he tries to poison her. Try being the word, because not only does he have to drink first to pretend the wine he offers is safe, but as she watches him die she takes a big draught without flinching, as the ruby at her throat flashes. "The night is dark and full of terrors, old man, but the fire burns them all away."

Stannis's ravens travel fast. Robb goes to confront Jaime Lannister, whom he's been dragging around with him wherever his army goes on their campaign in the Riverlands. Jaime is as cocky as he can be in reply, which is pretty hard when you have a really big wolf standing beside your captor looking quite ready to tear your throat out. Brave man, that Kingslayer.

Back in King's Landing, Tyrion and Shae have some time together where they discuss just how appalling the city smells, and Littlefinger tries to one-up Cersei. "Knowledge is power." It really doesn't work, since she pulls on him what he pulled on Ned last year—the palace guards belong to her, for the moment, and Littlefinger will have to watch himself. "Power is power," she says and smiles.

In Robb's camp, peace terms are under discussion between Robb and Alton Lannister. Robb basically wants his sisters, his father's bones and his father's sword back, and for the North to be recognized as an independent nation. Alton is amenable to the first three, not so much to the last one. And Robb reminds us, once again, that just about everyone now knows the Lannisters' dirty little secret, just before he dispatches Theon to the Iron Islands so as to drum up support from his family, and Catelyn to negotiate with Renly Baratheon.

Cut back to King's Landing, as ironically enough it seems that the last person to learn the secret is Joffrey himself. Not that he's willing to doubt his own legitimacy; he's more concerned about the existence of Robert's bastard children, as he believes they would be an insult to his father's memory. (The irony, it hurts.) In the midst of redecorating the throne room, he questions Cersei about it all and is pretty darn rude. Cersei does what all of us have been longing to and gets the requisite Joffrey slap of the season in. Unfortunately, it appears Joffrey isn't half so afraid of her as he is of Tyrion. "What you just did is punishable by death. You will never do it again. Never." Cersei's hold over her son is crumbling fast, and she knows it.

And she's powerless to stop what comes next, which happens to be a lot of Gold Cloaks bursting into Littlefinger's brothel, where Ros has apparently been promoted—by what means we shall not guess—and is coaching the girls with a rather familiar speech. Janos Slynt arrives, seizes Robert's infant daughter Barra and, as her mother screams, slits her throat. note How's that for outdoing the first episode of season 1? Bran's push suddenly looks mild by comparison.

The same thing is happening to black-haired children all over the city. (How many bastard children did Joffrey think Robert had?) But, though they're prepared to torture Tobho Mott for information, they've managed to let at least one bastard slip through their grip...

...because Gendry and Arya are long gone, riding through the Dark Hedges and on their way to the North.