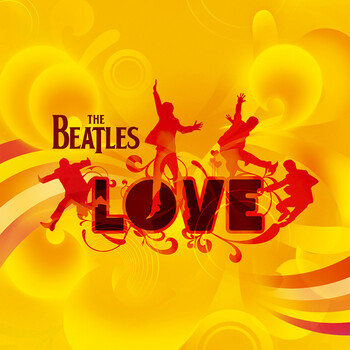 It's all you need.
Advertisement:

Cirque du Soleil's nineteenth show opened in 2006. It is the fifth of their permanent productions in Las Vegas, Nevada (at the Mirage Hotel and Casino) and their first show to combine the Jukebox Musical genre with their "house style".

To say they started at the top in terms of the song catalog to tackle is quite the understatement. This show is a collaborative effort with Apple Corps Ltd, allowing not just the use of the songs of The Beatles in a show, but the original recordings of such as remixed by Sir George Martin and his son Giles.

The characters whose onstage escapades (including more dance than usual for Cirque) are set to this music are drawn from both the songs of the Beatles and the social, political, and cultural world and time the group emerged from; the Beatles themselves are not portrayed onstage but their presence is always there. The story travels from the rubble of World War II to the height of Beatlemania, from the initial backlash to their reinvention in the age of psychedelia. Metaphorically, the group's breakup is addressed, but so is the endurance of what they created together.

This show, as with most of Cirque's Vegas productions, has not been filmed in full, though material from it was incorporated into the 2012 3-D movie Cirque du Soleil: Worlds Away. There is a soundtrack album that contains the bulk of the 90-minute show's music (the only official remix of The Beatles' recordings released to date), as well as a making-of documentary, All Together Now.

Feel free to compare and contrast this show with the film Across the Universe (2007) — the 2008 Grammy Awards ceremony featured a crossover production number featuring cast members from both.