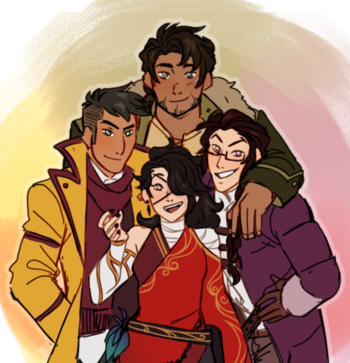 Reverse RWBY is a Fan Verse that acts as an Alternate Universe of the show. It was inspired by a Tumblr post by the colorinplatinum. Bastart13 took the post and rolled with the idea, creating fan-art and ideas based off of it.

In this verse, the heroes of RWBY are antagonists while the villains are heroic. The main cast consists of team ERMN— Emerald. Roman, Mercury, and Neo —and team WTCH—Watts, Tyrian, Cinder, and Hazel.

Bastart13's posts in the AU can be seen here

This fan-verse provides examples of: