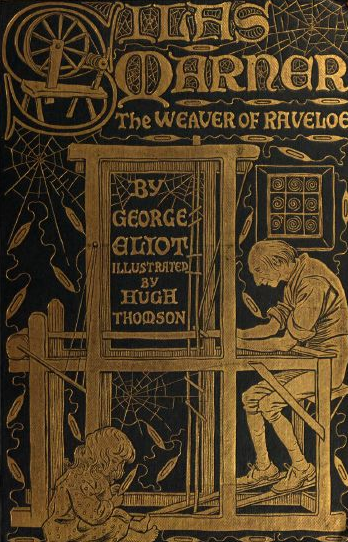 Silas Marner is an 1861 novel written by George Eliot. Unlike other Eliot novels, Silas Marner is a very compact book with a straightforward narrative and very few subplots. It concerns Marner, a weaver unfairly forced out of his home village after being framed for robbery. Moving to the small town of Raveloe, he leads a quiet, lonely life where he hoards his money and is treated with suspicion by the townspeople until he is struck by tragedy, and then redemption, shortly thereafter.
Advertisement:

It is now in the public domain, and can be read in its entirety here

. Steve Martin produced, wrote and starred in a modern-day movie adaptation of Silas Marner called A Simple Twist of Fate, released in 1994.