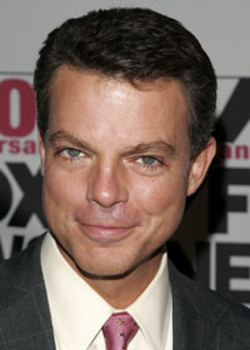 He ain't gonna do it the boring way.
"Our talk shows are what they are. This is the news."
Advertisement:

David Shepard "Shep" Smith (born January 14, 1964) is American broadcast journalist best known for his 23-year career at Fox News, having been with the network from its inception in 1996 until 2019. During his time with the channel, he served as a field correspondent and anchored several news programs, including Fox Report with Shepard Smith, Studio B and Shepard Smith Reporting.

Born and raised in northern Mississippi with the accent to prove it, Smith attended "Ole Miss"* the University of Mississippi as a journalism major, leaving two credits short of graduation when he got his first reporting job. He still has a deep bond with the university, however, being a die-hard Ole Miss football fan in particular with a burning hatred of LSU.note Louisiana State University, one of Ole Miss' most bitter rivals

On air, he is known for his energetic, straight-talking, no-nonsense, and decidedly nonpartisan reporting style, leavened with a heavy dose of sarcasm when the occasion calls for it. Fellow anchor Rachel Maddow (yes, of MSNBC) has said that he is better than anyone else in the industry at pulling off both "regular guy" news commentary and "Voice of God" gravitas with equal facility, while Smith himself says that he tries to bring excitement to everyday stories, but to be as calm and "zen" as possible during times of national tragedy because that's when calm is most needed. His cool was notably shattered, however, in the wake of Hurricane Katrina, in which a 32-foot wall of water obliterated the Gulf Coast of his home state; along with Anderson Cooper, he is heavily credited with bringing national attention to the catastrophic failure of government relief efforts on the local, state, and federal levels, and he reported live from Louisiana and Mississippi for several weeks in the wake of the disaster. He rarely talks about the experience now, citing it as too painful to revisit.

He is also famous for refusing to let his guests get away with lying and for his hard-hitting questions, including demanding answers to the blockage of the Zadroga Billnote to fund healthcare for the first responders suffering illnesses as a result of answering the call to duty on 9/11 and in the weeks and months after in Congress, roundly scolding the news networks (including his own) for fear-mongering when isolated cases of Ebola virus were brought to the United States, and making his opposition to the use of torture in interrogation brutally clear during a live webcast. His ratings explain why he gets away with challenging the party line so regularly; his is the highest-rated news program on the channel (and, in fact, all of cable news), one of the highest-rated programs on the channel full-stop, and he is easily Fox's most trusted and respected anchor.

He began anchoring The Fox Report with Shepard Smith (7pm ET) in 1999 and Studio B (3pm ET) in 2002. With his shift to managing editor of the Breaking News Division in 2013, he left The Fox Report, and Studio B was retooled into Shepard Smith Reporting, keeping the former's time slot but moving to an all-new studio exclusively for the Breaking News Division. The "Fox News Deck", also the network hub for breaking news, is the only Fox studio used by only one anchor.

He officially came out of the closet as gay in 2017, though his sexuality had been an open secret for years before that.

On October 2019, Smith stunned viewers and colleagues when he announced on Shepard Smith Reporting that he was leaving Fox News. In July 2020, CNBC announced that Smith would join the network as chief general news anchor and chief general breaking news anchor, now hosting The News with Shepard Smith, a primetime general news program that airs weekdays at 7:00 p.m. ET and launched on September 30, 2020.

Ahead, tropes from The Fox Report/Studio B/Shepard Smith Reporting/The News with Shepard Smith, etc. Let's get to it:

"When we mess up the facts, call me. [But] we're not going to do it the boring way."