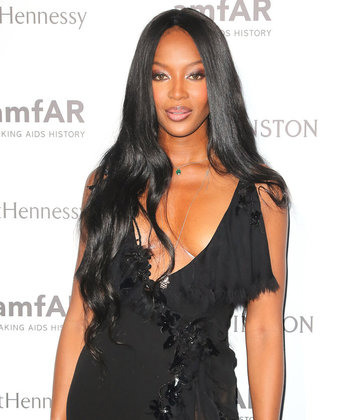 Naomi Campbell (born 22 May 1970 in London, England) is a Black English supermodel of Afro-Jamaican and Chinese-Jamaican descent who was, at the height of her career, one of the most famous working models in the world. She was the first black model to be on the cover of Time Magazine and on the covers of both French and British editions of Fashion Magazine Vogue. She, along with Cindy Crawford, Christy Turlington, Linda Evangelista, Stephanie Seymour, and Tatjana Patitz, can be credited for the resurgence and popularization of the "supermodel" iconography during the mid 1980s and early 1990s and was labelled as part of "The Trinity"note along with Evangelista and Turlington, "The Big Five," and "The Big Six" (after Kate Moss rose to stardom) in the modeling world at the time. Nowadays, Campbell is regarded as one of the "Original Supermodels" and remains one of the most, if not the most, famous black models of all time, with only Iman and Tyra Banks capable of challenging her claim to that status.
Advertisement:

Outside of her modeling career, she is also known in the media for having anger issues, with well-documented and publicized cases of assault against former employees and police officers, the latter earning her a lifetime ban from British Airways (as she committed the assault at their airline terminal).

Apart from modeling, Campbell has ventured out into acting, reality tv hosting, singing, and activism, especially as it relates to racial discrimination within her industry. She is the primary coach and executive producer for the supermodel reality competition show The Face. Her filmography includes: