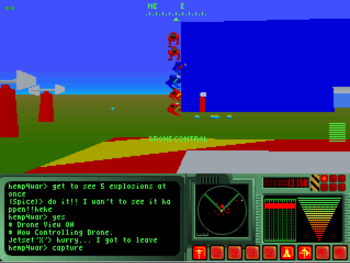 Also the first multiplayer online game where players could make totem poles.
CyberStrike was a multiplayer online game featuring 3D polygonal mech battles, released in 1993 by Simutronics Corporation, also the developers of the GemStone series and DragonRealms. Primitive and untextured by today's standards, it was quite groundbreaking in its day — being the only multiplayer 3D online game at the time of release. In fact, this distinction led Computer Gaming World to create an appropriate new awards category, which it won in 1994. Originally exclusive to the online service GEnie, eventually it was made available on AOL and Prodigy, and then moved to the WWW.
Advertisement:

A sequel, CyberStrike 2, was developed by Sony's 989 Studios and released in 1998 with considerably revamped gameplay, textured graphics, and a number of other improvements. It's still running to this day, the official site is here

Tropes for the first game include:

Tropes for the second game include: