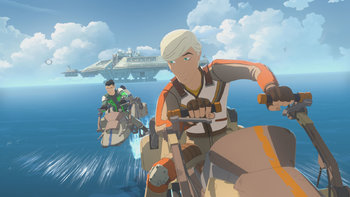 Kaz is stressed out because of his work trying to fix an engine, especially after it falls off the side of the station when he tries to work outside so he can watch a race. After hauling it out of the ocean, he gets a chewing-out from Yeager over his lack of work ethic. Later, Kaz is talking to Aunt Z at her tavern, and considers moving to a different place on the Colossus. He is approached by a pilot named Rucklin, who says he's heard of him and invites him to sit with him and his friends, Gorrak Wiles and Lin Gaava.

Kaz is impressed by the trio, and surprised when they reveal that Yeager used to be a racer. They mention that Yeager used to use hyperfuel as a boost. He agrees to Rucklin's offer of a speeder bike race. However, Kaz's bike malfunctions, and Rucklin has to save him. After returning to the Colossus, Yeager turns up and chews Kaz out for taking too long of a break, and Kaz has to leave. Once he's out of earshot, Rucklin thanks his Sullustan friend for the job he did on the bike, because now they have Kaz right where they want him.

After getting chewed out by Yeager again, Kaz tells Neeku about meeting Rucklin. Neeku warns that Rucklin and his friends don't have a very good reputation, but Kaz doesn't listen. He decides to sneak out and see Rucklin. He sees his racer, and Rucklin wishes he could see Yeager's ship. Kaz agrees to sneak him into Yeager's private hangar so they can see the ship. The two sneak into Yeager's office, avoiding Bucket, Yeager and Tam in the process, and Kaz discovers, via a screen with old photos, that Yeager was both in the Rebellion and had a family. However, the hangar door is locked, so that trip is scuppered. When Kaz isn't looking, Rucklin steals a container of hyperfuel, and leaves at the first opportunity.

Later, Kaz goes over to Rucklin's hangar to see if he and his friends want to go for lunch, but as they block Kaz's view of the stolen fuel, they decline, Rucklin saying that a race will begin soon, which he's competing in. Bucket is doing inventory and discovers the hyperfuel missing. In a panic, he rolls off to tell Tam and Neeku. Kaz and BB-8 arrive, and learn that the fuel is missing. Tam tells him that using more than a few drops of hyperfuel can turn ships into a flying bomb, and Kaz realizes that Rucklin must have stolen it. He and BB-8 take off in a hurry, rushing through crowded hallways. In his hangar, Rucklin pours hyperfuel into his ship, oblivious to the fact that he's putting in far more than is safe.

Eventually, Kaz realizes that he won't get to Rucklin in time if he goes through the hallways, and he and BB-8 take the service duct shortcut. Arriving, Kaz jumps onto Rucklin's ship just before he launches, and as the ship falls toward the ocean, uses the emergency switch to open the hatch, and then manages to activate the ejection seat, launching them away from Rucklin's racing ship before its inevitable explosion. However, the ejection seat's parachute was removed because of its weight, but BB-8 fires his cable and saves them. Unfortunately, Kaz and Rucklin are heavier than the astromech droid, and he begins to roll towards the edge as the young men climb the cable. Yeager arrives just in time to help pull them up.

Kaz attempts to apologize to Yeager, but he doesn't appear to be listening. Rucklin, furious, yells at Kaz for the loss of his ship, and Kaz points out that Rucklin would be dead if it wasn't for him, and that since he stole the fuel he only has himself to blame. Unaware that Yeager is in earshot, Rucklin says that no one can prove anything, and vows he'll get Kaz back before he and his gang leave. Yeager, looking at the silhouette of Captain Doza in the tower, comments that they can't attract attention.

At Yeager's shop, Kaz tells Yeager he understands if he wants to fire him, but Yeager instead orders him to clean some engine parts outside, and tells Kaz that despite what happened, he's a good person. Kaz, talking to Neeku and Tam, realizes it means he can watch the race. BB-8 tries to get Kaz's attention as the cart of parts begins to roll over the edge of the platform, but Kaz is a bit too slow...