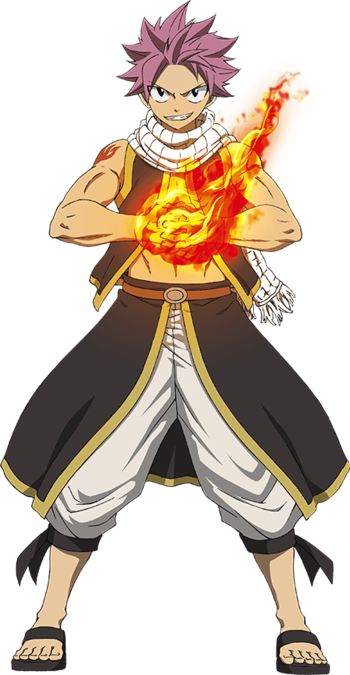 The main protagonist of the seriesnote As much as there is a main protagonist in this Ensemble Cast, Natsu is a famous Fairy Tail wizard known as "Salamander". He is generally regarded as the guild's problem child who breaks more property than the master can handle, but no one is more loyal to his friends than he is. He was raised from a young age by the dragon Igneel, who mysteriously disappeared seven years ago on July 7, X777. Ever since then, Natsu has been on a personal journey to find the dragon and learn what happened.

Igneel trained Natsu to become the Fire Dragon Slayer, a wizard who has the ability eat, breathe, and strike with fire, and is immune to practically any flame. He is also able to activate Dragon Force, which exponentially increases his strength, speed, and magic. After eating Laxus' lightning magic during his battle with Hades on Sirius Island, Natsu becomes the Thunder-Fire Dragon, able to combine his flame attacks with electricity. However, his awesome magic comes with crippling motion sickness, which prevents him from riding on virtually anything that moves without keeling over.