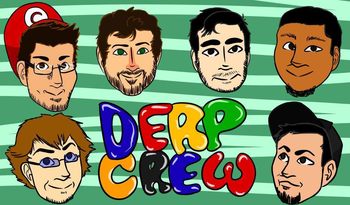 (a.k.a. just Smarty, and known for a time as John Page), and Aphex Arcade

. They frequently collaborate with each other in gaming sessions, although it's rare that all of them are together at once outside of games like Shell Shock Live.
Advertisement:

Other Let's Players that appear on a regular basis with the Crew include Ohmwrecker, GassyMexican

Chilled, GaLm, Ze, and Tom had a podcast called Tangled Cords, but it was eventually discontinued. Also, while most of the guys still game together, especially Chilled and Ze, the Derp Crew itself is largely discontinued.

The Derp Crew provides examples of: